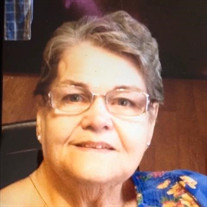 On November 27, 1940, Harmon and Alice Garris welcomed a beautiful healthy baby girl named Alice. They would raise Alice and her siblings Paul, Harmon and Donna in Point Pleasant, NJ. At a very young age of only 7 years old, she was given a life changing diagnosis of Polio. Life changing as a child as she would leave home from her parents and spend many months at a time out of state at facilities for several surgeries and rehabilitation to stop or slower her inevitable decline to being a paraplegic for life. She remained an inspiration to many as she was named the March of Dimes Poster Child. She never let this dampened her outlook on life. She attended public schools and led life as would any other school age child. She was employed as Executive Secretary for the US Army R&D Laboratory in Monmouth County at the age of 19 attaining a rank of G-5. During hers stay at one facility she became friends with carol Wright, which would be a lifelong friend. Carol was from Whiting, this became the connection to a young man named Rich. Alice and RIch married in 1961, soon after marrying her very large family would be started. They would have 5 children (4 boys and girl). 5 children born to a mom that was paralyzed seems unimaginable to many. This amazing women always put her kids before any need of her own, she always made sure they got to baseball practice five days a week, many times in different locations. All after getting up at 3am for years to deliver newspapers before the kids went to school, and then returning to deliver another set after, during heat, rain and even unsafe snowstorms. Then maintaining her home, cooking dinner for the family before the evening driving. After practice, after baths, she would become the bookkeeper and payroll dept. for the family masonry business. As you may think, this was way too much. No, she found the time to volunteer. She gave many years of dedicated services to the Whiting Vol Fire Co Ladies Aux. Until her health wouldn’t allow anymore, she very proud to be a lifetime Member. Alice’s husband became disabled while her family was still young, she became his primary caregiver and wouldn’t have had it any other way. In 2002 Alice suffered a Brain Aneurysm, Doctors said her chance of survival was very slim and not likely. They didn’t know Alice. Once again, her faith and will brought her through. Her mission continued, she remained Richie’s caregiver until he passed later that year. Alice remained determined to be there to see and be part of all her kids and grandchildren's life, and she certainly succeeded at being a role model, caregiver, shoulder to cry on, advisor (whether you wanted to hear it or not). She was a true Matriarch to her family. After many years of ignoring her own needs, Alice’s condition finally started to take over and started to need more help from her family, this was not easy for her to accept. Reluctantly she accepted help and appreciated everything anyone would do for her, her best medicine was always a quick visit and a cup of coffee. Earlier this week, Alice prayed to her Lord that she would be called home as she was too tired to continue, she asked for her family to gather so she could say goodbye. With a clear mind she personally gave each and every one a hug, an” I love you and goodbye”. Even as she was being called home, she gave her family the gift of being able to say goodbye. Hearing her prayer, on October 20, 2019, Alice WALKED to her place in heaven. Truly an amazing Lady, loved by so many. Alice is survived by her two siblings Harmon and Donna, three sisters in law that were more like sisters Judy Garris, Betty Wright and Lorraine Thomas. Her five children, Rick and his fiance Robin , Jeff and his wife Robin, Mike and his wife Anna, Tim and his wife Danielle, and Kim and her husband Tom. 12 Grand children: Shayna, Katy, Crystal, Tara, Danielle, Kaitlyn, Kevin, Ricky, Ryan, Aly, Gavin, and Riahna 7 Great- Grand children: Mia, Macy, Melina, Joshua, Scarlett, Xavier, and Lucas

On November 27, 1940, Harmon and Alice Garris welcomed a beautiful healthy baby girl named Alice. They would raise Alice and her siblings Paul, Harmon and Donna in Point Pleasant, NJ. At a very young age of only 7 years old, she was given... View Obituary & Service Information

The family of Alice J Bowker created this Life Tributes page to make it easy to share your memories.

Send flowers to the Bowker family.