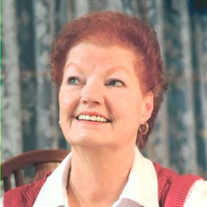 Carol C. Ruggiero (nee Smith) passed away on Friday, September 20th after a long battle with Alzheimer’s disease. She remained disarmingly beautiful and loved by all until the very end. Carol was born in Newark, NJ on April Fool’s Day 1936 to William and Ursula Smith. She attended Central High School in Newark and married her high school sweetheart Joseph T. Ruggiero on September 12, 1954. The couple celebrated their 65thwedding anniversary just a week before Carol’s passing. Though her health was failing at the time and her memory was gone, Carol was blessed with a brief moment of lucidity during which she recognized her wedding photo and stared at it fondly before giving it a kiss. There was never a more devoted wife. Prior to starting a family, Carol worked as a nurse’s aide and secretary, then spent her children’s formative years dedicated to being the world's best homemaker. Her three daughters were nurtured and adored, her husband was doted on and her house was kept so clean had the pope ever decided to stop by and eat off the linoleum, he could have safely done so. (Let it be known that no piece of lint lasted on Carol Catherine Ruggiero's floor for more than 2.5 seconds.) Carol was known for many things: her beauty, her kindness, her love of animals, her comforting and enthusiastic hugs, but nothing so much as her cooking. Though she apparently never learned to prepare a meal for under 17 people, Carol was a master in the kitchen. “Food is love,” was her motto and she was an extremely loving person. She was such a fantastic cook family and friends still fondly reminisce about meals she prepared over forty years ago. The woman had a gift and she happily shared it with everyone she could. No one left her house hungry and no one left without a hug. Once their youngest child was out of the house, Joe and Carol retired to the Poconos Mountains where they’d spent their honeymoon so many years before. It was a new and lovely chapter in which Carol flourished. They joined Saint Bernadette’s church in Canadensis and Carol found her true calling as a Catechism teacher. It was a position she simply adored. The couple made many close friends at Saint Bernadette’s and enjoyed a lively retirement for many years, going on trips and participating in church activities. But Carol loved nothing more than sitting on her back patio with one of her beloved cats on her lap and staring out at the beautiful yard Joe had made for her, watching the birds in the trees, and hoping to spot a deer. In later years, the couple relocated to Whiting, NJ to be closer to family. Carol is preceded in death by her parents, William and Ursula Smith and by her beloved sister Marilynn Velle. She is survived by her husband Joseph, her daughters Deborah Ruggiero of Allentown, PA , Denise Ruggiero of Whiting, NJ, and Diane Ruggiero-Wright of Los Angeles, CA. She leaves behind three grandchildren: Alexis Cook-Lisa, Dillon Cook and Rex Wright, as well as seven great grandchildren: Isabella, Frankie, Dominick, Victoria, Santino, Aleah and baby Fiona. A funeral mass will be held for Carol on Saturday, September 28th at 11:00 Am at Saint Lucy’s Church, located at 118 7thAve, Newark, NJ 07104. In lieu of flowers the family ask that donations be made to Alzheimer’s Association. Their web address is alz.org.

Carol C. Ruggiero (nee Smith) passed away on Friday, September 20th after a long battle with Alzheimer&#8217;s disease. She remained disarmingly beautiful and loved by all until the very end. Carol was born in Newark, NJ on April Fool&#8217;s... View Obituary & Service Information

The family of Carol C Ruggiero created this Life Tributes page to make it easy to share your memories.

Send flowers to the Ruggiero family.