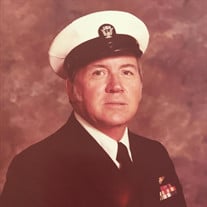 Charles Clark Borton Sr, age 93, of Cape Coral Florida. Formally of Beachwood/Seaside Park, NJ. Passed away peacefully in his home on Friday; May 21, 2021. He was born in Germantown, Philadelphia on October 28,1927 before moving to Seaside park at age 6. He was a graduate of Toms River High School and joined the Navy in January 1946. He then served two years as Seaman first class in Lakehurst New Jersey, followed by 1 1/2 years in the National Guard as a Staff Sargent in Heavy Tank Company in Lakewood with his brother Roy. He then spent 31 years in the Naval reserves out of Lakehurst New Jersey serving as Radar Operator and Aviation Ordnanceman authorizing maintenance on airborne weapons, aircraft guns and targets. He also served during the recall of the Cuban missile crisis. He and his wife June were co-owners of the CHARLROY Motel in Seaside Park which was built by his father and named after him and his brother Roy. Prior to that his parents owned Helen’s restaurant in Seaside Park where he learned to become a great cook at a young age while helping his parents in the restaurant. He passed his cooking skills to all his children. He was a great father and provider and loved by all who knew him. He was predeceased by his beloved wife June Louise Hummel Borton and son Carter Wayne Borton. Surviving are His daughter Barbara Eckert and her husband Ronald of Bayville, NJ, Son Charles Borton Jr. and wife Beatrice of Fredericksburg Texas, daughter Morgan Blevins and her husband Justin of Beachwood, NJ, daughter Linda Holmes and her Husband Robert of Montgomery,TX son John Borton of Houston TX and sister-in-law Eileen Hummel of Stevensville Maryland. He leaves 13 grand children, Tracy Griffin and her husband Troy, Scott Eckert, Pamela Eckert, Ryan Eckert, Jordan DeMont and her husband Matt, Austin Blevins, Kristen Blevins, Cara Turner And her husband John, Sean Holmes, Linette Holmes, Ian Borton and Everett Borton He also leaves nine great grand children, Matthew Griffin, Allison Griffin, Emilee Griffin, Danielle Tolosi, Eva Turner, Lena Turner, Levi Turner, Elora Turner and Sage DeMont. He was beloved uncle to Scott Hummel and his wife Anna, Lisa Hummel, Lori Brinzer, Lynda Romaine and her husband Michael, Jessica Staley, Carla and her husband Craig, Roger Hummel Jr and Cheryl Raley. He also leaves his Partner of 16 years Jean East. Visiting hours will be Friday, May 28 from 10:00AM to 12:00PM followed by a funeral service at 12:00PM at the family owned Carmona-Bolen home for funerals 412 Main St. Toms River, NJ 08753.

Charles Clark Borton Sr, age 93, of Cape Coral Florida. Formally of Beachwood/Seaside Park, NJ. Passed away peacefully in his home on Friday; May 21, 2021. He was born in Germantown, Philadelphia on October 28,1927 before moving to Seaside park... View Obituary & Service Information

The family of Charles Clark Borton created this Life Tributes page to make it easy to share your memories.

Send flowers to the Borton family.