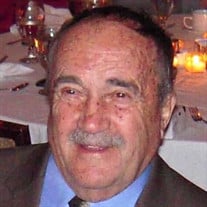 Charles A. Carbone, age 87 of Toms River, passed away on December 24, 2019. Charlie was born and raised in South Amboy, NJ where he met and married the love of his life, June. They moved to Toms River establishing roots and raising 9 children: William (Holly), Dawn (David), Kevin (Debbie), April (Darryl), Patti (Kevin), Deborah, Glenn, Jeanie (Eric) and Charlene (Joseph). They have 12 grandchildren: Jason (Anna), Daniel, Dana (Anthony), Alexis (Rhett), Kevin Jr. (Crystal), Billy Jr., Eric (Victoria), Bryan (Katie), Kimberly, Tyler, David Jr., and Anneyel June. They have 11 great-grandchildren: Tyce, Isabella, Josef, Sophie, Elliana, Hayden, Milla, Grace, Kaeden, Declan, and Korra. Charlie has cherished siblings: Frankie (Joyce), Gaetana (Augie), and Tony (Joan). Charlie has many adoring nieces and nephews that he considered his own. Charlie was an Army veteran who served during the Korean War. After leaving the military, he proudly worked for 50 years as a union laborer out of Asbury Park’s Local 343. After retiring, he enjoyed working with DePalma Contracting, making many loyal friends. He could often be found in Atlantic City, a place he loved. He will be greatly missed for his sense of humor and immense care for others. Charlie looked out for every living soul, including creatures big and small. His greatest joy in life was making others happy. He led by example and those around him admired him. He was patient and kind. The sacrifices he made for his family at an early age were a testament to his incredible character and selfless soul. “Do good” was his affectionate, repeated phrase. He admired nature and appreciated the unseen beauty that most would not notice. He focused on the positive. To know him was to love him. He was a devoted son, husband, father, grandfather, brother, uncle, cousin, and friend. To put it simply, Charlie was and will always be “The Man. The Myth. The Legend.” Visitation will be Sunday, December 29, from 1-4 pm at Carmona-Bolen Home for Funerals, 412 Main St., Toms River. At 9 am on Monday, December 30, a procession at Carmona-Bolen will lead to entombment at Ocean County Memorial Park in Toms River, 1722 Silverton Rd. In lieu of flowers, please donate to a local animal shelter or rescue center. Condolences can be sent to: www.carmonabolenfh.com

Charles A. Carbone, age 87 of Toms River, passed away on December 24, 2019. Charlie was born and raised in South Amboy, NJ where he met and married the love of his life, June. They moved to Toms River establishing roots and raising 9 children:... View Obituary & Service Information

The family of Charles A Carbone created this Life Tributes page to make it easy to share your memories.

Charles A. Carbone, age 87 of Toms River, passed away on December...

Send flowers to the Carbone family.