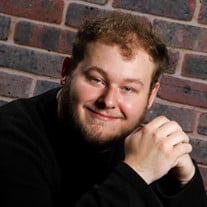 On Sunday, March 14th, 2021, Christopher Thomas Tine, loving son and brother passed away from us at the age of 18 years. Christopher, or Chris as most called him, was born here in Toms River on January 29th, 2003 to his mother, Jennifer Fowler and his father, Christopher Tine. As a senior enrolled at Toms River High School South, Christopher had planned to graduate this June. Perhaps even furthering his education through college or culinary school. Chris was also an avid sports fan, especially football and his New Orleans Saints. He enjoyed 2 years playing as an Indian for his high school team before finding his way to the wrestling team. Chris was also well known for abundant loyalty to his friends and family, his enormous heart and especially his unbreakable bond with his Mother. He was also, in every sense of the word an overprotective big brother or loving grandson who could always be counted on to do almost anything. That is unless you happened to be one of the few people he was not bigger or older than, then you would encounter the stubborn, strong willed sometimes smart aleck that could both frustrate, amaze and amuse you, and oftentimes do it all at the same time. Christopher was loved by everyone, we all had to love him... because it was easy. Christopher is preceded by his Grandmother Susan Tine and survived by his Mother, Jennifer Fowler, his Father, Christopher Tine and his Sister Anna Marie Horvath. Grandparents Monica Price, Robert Fowler and John Tine. Godparents Penni and Joe Hagan. Aunts and Uncles Michael Pabian, Jacqueline Mcauley, Amanda Fowler, Robert Fowler Jr, Madeline Edwards, John Tine III, Pat and Thomas Price. And lifelong best friends and brothers Matthew Zyckowski, Dylan Applegate and Tyler Papiomitis. As well as many other friends and family members too numerous to mention. Flowers and Donations may be made to the family at: 836 Beach Ave. Beachwood, NJ 08722 If you would like to make a charitable donation on Christophers behalf, the family would suggest donations be made to the CovenantHouse.org. This charity, like Christopher, helps homeless young people in need and we feel it is a great fit for him.

On Sunday, March 14th, 2021, Christopher Thomas Tine, loving son and brother passed away from us at the age of 18 years. Christopher, or Chris as most called him, was born here in Toms River on January 29th, 2003 to his mother, Jennifer Fowler... View Obituary & Service Information

The family of Christopher Thomas Tine created this Life Tributes page to make it easy to share your memories.

Send flowers to the Tine family.