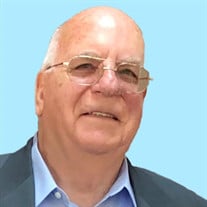 Daniel Sebastian Fiore Beloved husband of the late Estelle Aquilina Fiore, passed away February 17, 2021. He was born in Manhattan to Gerardo and Lucia Fiore. He was raised in the Bronx with his late brother Anthony Fiore. He attended Evander Child’s High School where he enjoyed being a member of the track team and being a life-long friend to his high school buddies. He married Estelle in 1958 and moved to Bergenfield, NJ where they raised their three children. Dan served his country in the US Marine Corp Reserve. He worked as a Mechanic for MABSTOA in Harlem for 29 years and was a Union Representative there. He also worked for the Dumont School System for 5 years prior to retiring. In 1997, Dan and Estelle moved to Whiting, New Jersey. He was the former president of the Italian American Club of Whiting. He was also a member of the Knights of Columbus, the Whiting Volunteer Fire Company, and the SOS of Cedar Glenn Lakes. Dan was a loving, devoted father and friend, he was predeceased by his wife Estelle Fiore in 2005. He is survived by his son Daniel Fiore Jr. and his wife Ginger, his son Jerry Fiore and his wife Rita, his daughter Gina Corrado and her husband Salvatore, his grandchildren, Patrick, Brittany, Pietro, Kristina, Luke, Jake, and Matt, his great- grandchildren, Hunter, Logan, and Alexander, and his dear friends Millie Aprea, Dan and Marge Chicco, Monroe and Pat Grassi, Rev Jim Davis, Larry Bolen as well as so many others. He was also a loving Uncle to many nieces and nephews. In lieu of flowers, please make donations in Daniel’s memory to the Whiting Volunteer Fire Company, 120 Lacey Road, Whiting, NJ 08759. A graveside service will be held at 11:00am on Thursday, February 25th, 2021, at St. Joseph Cemetery, Cedar Grove Rd., Toms River. Strict social distancing rules will be in place, and a repast will be held at a future date. Services are under the direction of the Carmona-Bolen Home for Funerals 66 Lacey Rd, Whiting NJ.

Daniel Sebastian Fiore Beloved husband of the late Estelle Aquilina Fiore, passed away February 17, 2021. He was born in Manhattan to Gerardo and Lucia Fiore. He was raised in the Bronx with his late brother Anthony Fiore. He attended Evander... View Obituary & Service Information

The family of Daniel Sebastian Fiore created this Life Tributes page to make it easy to share your memories.

Send flowers to the Fiore family.