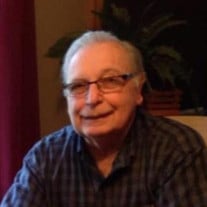 Daniel (Danny) Fredrick Little, age 83, of Toms River NJ, passed away in his home surrounded by family on May 12, 2020. Danny was born in Hoboken, NJ and graduated from Demarest High School in 1956 then joined the United States Army, serving active duty for 2 years and 4 years in the Reserves. He continued to live in North Bergen, Lodi and Wood-Ridge, NJ. In April 1961, he married the love of his life, Dorothy Lambiase. The Littles relocated to Munster, Indiana in 1972 then moved back to Brick and eventually Toms River. He retired in 2012 from the County of Ocean. Danny loved WWII documentaries and books and was known as an avid Notre Dame football fan, attending every home football game possible with his family. He was an accomplished bowler participating in leagues in every stage of his life. Danny was proud papa to be league champs while bowling with his daughters on the team named “Papa and the Pinheads”. Danny was especially honored to be coach and manager of both daughters’ softball teams. He coached for 10 years and presided over the Munster Girls Softball league for several of them. Coach Little led multiple teams to league championships and managed numerous All-Star championship teams. He is known for the impact on his athletes as a patient coach with a positive coaching style. Danny also enjoyed playing softball, playing in the Men’s Senior Softball League of Berkeley for many years into his 70’s. There was nothing more important to Danny than his family. He was his son James’s pal of all pals. It was his grandchildren that he was most proud. He enjoyed frequent trips to Disney World along with attending as many of their sports, band and cheer events as possible. Danny is predeceased by his father William Little and his mother, Helen Wisiecki Little. Danny is survived by his loving wife Dorothy (Lambiase) of 59 years, his children; James Little, Karen Isaacs and her husband Scott; and Kerry Lorenca and her husband Michael. He was the proud grandfather of Bill King, Emily Kaniper (Marc), Kimberly Raheb (Rob), Matthew Isaacs, Anthony Lorenca (Emily), Alex Lorenca and Nicolas Lorenca and his dogs Milly and Tucker. Danny is loved by his cousin Pat Grady Rahtjen of Toms River; his sister-in-law Nancy Protomastro of Wood-Ridge; and his long-time friends, Charlie (Chas) and Terry Hoyt and family. He will always be remembered as fun uncle Danny by all his nieces and nephews. A memorial service to celebrate Danny’s life will be held with family and friends once we’re safe to all get together. In lieu of flowers, the family is asking for donations in Danny’s memory to James’s developmental vocational program, 21 Plus. Donation instructions can be found on their website at 21plus.org. Please indicate in memory of Daniel Little. The arrangements are under the direction of the Carmona Bolen Funeral Home, 412 Main Street, Toms River, NJ 08753 (732) 349-1922.

Daniel (Danny) Fredrick Little, age 83, of Toms River NJ, passed away in his home surrounded by family on May 12, 2020. Danny was born in Hoboken, NJ and graduated from Demarest High School in 1956 then joined the United States Army, serving... View Obituary & Service Information

The family of Daniel Little created this Life Tributes page to make it easy to share your memories.

Send flowers to the Little family.