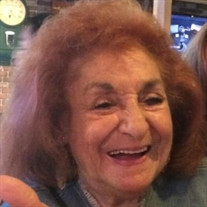 On Sunday May 2, 2021, Diane Guzzi, loving wife, mother and grandmother, passed away at the age of 83. Diane Stizza was born on August 4, 1937 in Newark, NJ to Mary and Albert Stizza. Diane married Peter Raymond Guzzi Sr. on Valentine's Day in 1958. On February 2, 1960 Diane and Peter welcomed their first born, Sharon Anne into the world. Soon after, the family moved to West Orange, NJ where Diane lived for 40 years. On May 18, 1962 the growing family welcomed their second child, Peter Raymond Guzzi Jr. Three short years later on December 31, 1965, the family of four became a family of five with the addition of Raymond Peter Guzzi. In 1970, the family purchased a home in Ortley Beach, NJ where they would spend their summers at the beach fishing, crabbing, going to the boardwalk & spending time with family & friends. In 1987, Diane and Peter Sr. bought the Outpost restaurant in Cream Ridge, NJ. They owned and ran the restaurant for 11 years and it was a place the whole family came together and worked in. Diane’s youngest son Raymond even met his wife Pam while working at the restaurant. That same year Diane and Peter Sr. moved to the Ortley house permanently. In January of 1994 the family lost their beloved father Peter Raymond Guzzi Sr. While living in Ortley, Diane became a member of the Moose Club that was just a short walk down the street from her house. Here she met many of her friends and shared lots of memories with her family as they attended the club's christmas parties. Diane also became a regular at Klee’s Bar and Grill, making friends with the staff and many other locals. Diane claimed her place at the bar with a seat everyone knew was hers. Klee’s remained one of her favorite restaurants and is a place that holds many fond memories for the family. In many ways, Diane was a very private person. However, when it came to her family, she loudly boasted about them to everyone she knew! Diane was a homebody but loved having her family over for dinner and to fish and crab on the bay. She loved her Lifetime mystery movies, Judge Judy shows, Impractical Jokers and spending time with her fur baby, Jersey Boy. If Diane wasn’t at home, the Moose Club, or Klees, you could most likely find her with her daughter Sharon at a Casino in Atlantic City or on a trip to Aruba. Diane was truly one of a kind, with her iconic red hair and infamous jean jacket that she never left the house without. Her infectious laugh and affectionate smile will truly be missed by many. Diane is preceded in death by both her parents Mary and Albert, her husband Peter Raymond Guzzi, and Daughter Sharon Johnson. She is survived by her two sons Raymond and Peter Jr., her son in law Lou Johnson Sr., her two daughters in law Pam and Jennifer and her seven grandchildren- Louis, Alexa, Samantha, Maya, Cooper, Chad, and Isabelle.

On Sunday May 2, 2021, Diane Guzzi, loving wife, mother and grandmother, passed away at the age of 83. Diane Stizza was born on August 4, 1937 in Newark, NJ to Mary and Albert Stizza. Diane married Peter Raymond Guzzi Sr. on Valentine's Day... View Obituary & Service Information

The family of Diane Guzzi created this Life Tributes page to make it easy to share your memories.

Send flowers to the Guzzi family.