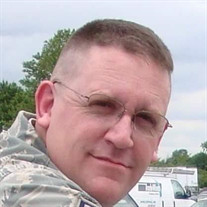 Donald Wayne Meador, age 53, of Whiting, New Jersey, died Thursday, January 17th, 2019 peacefully at his home in Whiting. Born on March Air Force Base in Sunnymead, California, he had traveled to every continent with the exceptions of Antarctica and Australia, prior to moving to Whiting in early 2018. During his 26-year military career in the Air Force, he spent 22 years in the Security Forces, and his remaining years as a First Sergeant. He retired from the Air Force in 2010 as a Master Sergeant and went on to work as a civil servant for the United States Naval Weapons Station Earle in Colts Neck, New Jersey, until retiring in Spring of 2017. Donald was an active member of his church, the Columbus Baptist Church in Columbus, New Jersey. He enjoyed, traveling, watching movies, woodworking, and nature, but most of all, he enjoyed spending time with his family. Donald is survived by his mother, Sue, his father Henry (Myrna), his wife, Rosalind, and his three daughters, Rachel (Michael), Michelle, and Caroline (Christian). Donald will be lovingly remembered by his three grandchildren Ben, Hanna, and William, as well as his two step-children Michael (Jamie), and Abigail (Cameron). The family would like to extend their gratitude to Grace Healthcare Services, the ALS Foundation, the Joan Dancy Foundation, as well as Dina Valdez, his homecare nurse. Services will be held on Saturday, January 19th, from 12:00- 2:00pm at “The Family Owned” Carmona Bolen Home for Funerals, 66 Lacey Rd., Whiting. Donations in Donald’s name can be made to “Joan Dancy and PALS”, People with ALS Foundation of Redbank, New Jersey. The Joan Dancy & PALS Foundation Riverview Medical Center P. O. Box 8157, Red Bank, NJ 07701

Donald Wayne Meador, age 53, of Whiting, New Jersey, died Thursday, January 17th, 2019 peacefully at his home in Whiting. Born on March Air Force Base in Sunnymead, California, he had traveled to every continent with the exceptions of Antarctica... View Obituary & Service Information

The family of Donald Wayne Meador created this Life Tributes page to make it easy to share your memories.

Send flowers to the Meador family.