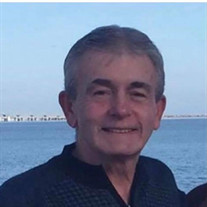 Francis " Frank" C Sheldrick 66 of Ocean Gate NJ Became an angel on Nov.6th 2020 surrounded by his loving family after a Courageous 5 year battle with Cancer. Frank was born in Newark NJ on April 30th 1954 and spent his Childhood in Kearny NJ and later in Hazlet NJ. Frank attended St. Cecila's Catholic School and is a Graduate of Ratitan High School. He is also a graduate of The School of Logistics Management in Cinnaminson NJ. and worked in that field until his retirement in 2015 due to his devastating Diagnosis. Frank is Predeceased by His parents Anne ( Davis) and Francis L Shedrick and His sister Anne Johns. Frank is Survived by his Loving wife Kerrie of 42 years. His Adoring Daughter Maureen DeRobertis and her husband Joel. His Devoted Son Patrick and his wife Christina and by his 3 beloved grandchildren, Eric (9) Emma (4) and Carter ( 6 mo) Frank is also survived by 2 brothers Dennis and Kevin and their spouses, His sister in laws Sheila Segedin and Aileen Kaposci and their spouses. and his brother in law Thomas McGeown and his spouse. He is the loving " Uncle Frank "to Jessica, Melissa, Katie, Casey, Danny, Kevin, Paul, Danny, Matt, Andrew, Ryan and Brendan, and The Great Uncle Frank to Meghan, Collin, Cooper, Jack, Nicholas, Palmer and Luke. and his Grand Dog Leo. Frank was an Avid baseball fan of the Berkeley Little League and Central Regional Baseball. Frank Coached Berkeley Little League for many years and He enjoyed watching his son and grandson play Ball. Frank will be missed by so many as he was known for his Kindness, his ability to love unconditionally and for his kid at heart disposition. He will remain in the hearts of all that have had the pleasure to have known him. Services for Frank are as followed. Family will receive visitors on Wednesday Nov. 11th 2020 from 2pm -4pm and 7pm- 9pm at Carmona Bolen Funeral Home 412 Main Street Toms River NJ. 08753.A Mass for Frank will be held on Thursday Nov. 12th 2020 at 10 am at St Joseph's Roman Catholic Church 509 Hooper Ave. Toms River River NJ 08753 In lieu of flowers please make a Memorial donation to St Jude's Children's Research Hospital 262 Danny Thomas Way Memphis TN 38105 or https://www.stjude.org/give/memorials-and-dedications.html. as Frank would always say" No Child should ever have to Endure a battle like this. "

Francis " Frank" C Sheldrick 66 of Ocean Gate NJ Became an angel on Nov.6th 2020 surrounded by his loving family after a Courageous 5 year battle with Cancer. Frank was born in Newark NJ on April 30th 1954 and spent his Childhood in Kearny... View Obituary & Service Information

The family of Francis Sheldrick created this Life Tributes page to make it easy to share your memories.

Send flowers to the Sheldrick family.