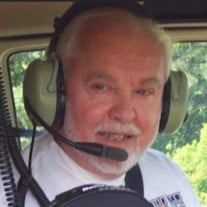 Francis “Frank” Barone, Jr., 82, of Whiting passed away peacefully on Saturday October 10, 2020 after a brief fight with cancer. Born in Newark, NJ Frank spent three years in the U.S. Navy serving as a damage controlman before joining the Newark Police Department in 1960. For several years, he served concurrently with his father Frank Sr., who was a Detective. During his career, Frank was assigned to the 2nd and 4th Precincts (in the North and West Districts, respectively), at Headquarters, and also commanded the Housing Patrol Unit. Rising to the rank of Lieutenant, he retired in 1988. Frank is survived by his wife of 59 years, Patricia (Grabowy); his children, Frank, Andrew and his wife Christy, and Sandra Youngman; his grand-children, Mikayla, Robert, Sydney, Emma, Hannah, and Michael; and his sister Frances Stutz. Frank was an avid and experienced traveler and explorer. As a young man in the navy, he visited Italy, Holland, and Spain. Then as husband and father, he shepherded the family on journeys from their home in Newark to destinations ranging from Prince Edward Island to Florida in the east, to Arizona and California in the west, and to many places in-between. Camping trips to Pennsylvania were a family favorite when the children were school age. In retirement, he and Patricia traveled extensively. Initial, months-long journeys by road to Alaska and then throughout Mexico were followed by frequent trips to Europe, South America, Asia, and Africa; numerous river cruises; and memorable expeditions to the Galapagos Islands and Antarctica. In total, he visited over 100 countries spanning all seven continents. Visitation will be Wednesday, October 14th from 2-4 p.m. and 7-9 p.m. at the Carmona-Bolen Home for Funerals in Toms River, NJ. A prayer service will be held at the funeral home. A private interment will take place at Holy Cross Cemetery & Mausoleum in North Arlington, NJ. In lieu of flowers the family asks that you consider a donation in Frank’s name to either the American Cancer Society, online at https://www.cancer.org/ or by phone at 800-227-2345, or the Lupus Foundation of America, online at https://www.lupus.org/ or by phone at 202-349-1155.