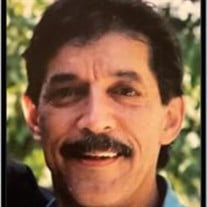 Gerard “John” Suarez, 74, died April 11, 2021 at his home in Whiting, NJ. He was born February 26, 1947 in Brooklyn NY, the son of Modesto and Emma Vasquez Suarez. John grew up and attended schools in Ridgewood, Brooklyn. He joined the Local 40 of the ironworkers’ union at the age of 20. He enjoyed the work as well as the camaraderie. While the work was strenuous, challenging, and dangerous, the combination of his strength, physical capabilities, and courage allowed him to excel. His work took him to a variety of different locations. He helped to place beams and bolt them up in Dallas, Atlanta, Ecuador and many other places. John was known by his co-workers as the Picture Guy. He enjoyed taking pictures of the first columns as a building began to rise. For his co-workers, especially the veterans, he enjoyed snapping pictures of his buddies sitting on the beams smiling. At the end of a job, he would hand out copies to workers who were retiring. Some of John’s most memorable photos were taken on top of the Fraunces Tavern building on Pearl Street, Grand Central Terminal and St. Patrick’s Cathedral. Many of his pictures have been featured in the New York Times, and several other publications. He was one of the first responders to Ground Zero to dismantle the steel. He had taken ill from working alongside the police and firemen for the duration. In addition to his parents, he was predeceased by his second wife, Ewa Suarez, and sister Sonja. Surviving are his five children, John, Stacy, Stephen, AnnMarie, and Samantha; four grandchildren, Rebecca, Megan, Jordan, and Brooklyn; three siblings, Elizabeth, Shirley, Sally; and many nephews and nieces. A private mass will be held at St. Elizabeth Ann Seton Catholic Church in Manchester Township NJ on April 26, 2021.

The family of Gerard "John" Suarez created this Life Tributes page to make it easy to share your memories.

Send flowers to the Suarez family.