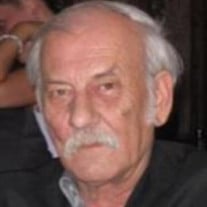 Harley "Pappy" Kopenhafer passed away May 21, 2022. Pappy was born on October 12,1948 to Elizabeth "Bette" and Harley J Kopenhafer. After moving quite a bit due to his dad's Naval Career he settled in Manchester, NJ. He was a lifetime member of the Manchester VOL. Fire Department, and a truck driver for over 50 years. Pappy's true love was his family. He had three amazing children, daughters JoAnn (Bj) , Kelly (Kelster) and his son, Harley Jason (Bubba/homeboy). Growing up there was a good chance one of them was always in the truck with him. Although, it was most likely Jay. When he wasn't working, he was either at the docks crabbing or watching a Nascar race. As long as you weren't cheering for Jeff Gordon, he would welcome you to watch with him. Pappys second love was his grandchildren. These kids could do no wrong and quite honestly it was almost ridiculous. They definitely had completely different rules than the rest of us. Riley was born first and if my dad could have given him the world he would have. Hannah followed soon after and this girl had Pappy wrapped around her finger from day one. Brody, named Brody Paul, was Pappy through and through. Let's just say the apple didn't fall far from the tree. Logan was next and for some strange reason he is the quietest out of them all. Elliana, then Harley Alexander (Born to the golden son) came and my dad was over the moon. Not many people get two grandkids with their namesake! Last but certainly not least Coralai came along and he would tell everyone she was a pistol. For the past few years Pappy was at Tallwoods in Bayville. These grandkids would beg to go visit and hang out with him in the courtyard. He wouldn't think twice about making Tiktoks (he was quite the dancer) or even throwing the ball around with them. Pappy is predeceased by his parents, Bette and Harley Kopenhafer, many beloved pets and his Blue Lobster Leroy. He is survived by his wife, Dawn Kopenhafer, daughter JoAnn Robillard and her husband Michael, daughter Kelly Kopenhafer and her fiance' Matthew, son Harley Jason Kopenhafer and his wife Jessica, brother Mark Kopenhafer, sister Colette Blackburn, grandchildren Riley Kopenhafer, Hannah, Brody and Logan Robillard, Elliana and Harley Alexander Kopenhafer, and Coralai Kopenhafer-Sych, Nephews Traye, Brian and James Blackburn, Scott Kopenhafer and niece Sarah Kopenhafer. Pappy also loved his extended family in Kansas. He lived there for quite a while and always talked about how much he loved being out there. My dad was not a man of many words. To know him was to love him, and if you were lucky enough he most likely flipped you off-at least once. "It's 5'oclock somewhere" Services will be June 3, 2022 at the Carmona Bolen Funeral home. Main Street, Toms River. 4pm-7pm. In Lieu of flowers please make a donation to your local fire department in memory of Pappy.

Harley "Pappy" Kopenhafer passed away May 21, 2022. Pappy was born on October 12,1948 to Elizabeth "Bette" and Harley J Kopenhafer. After moving quite a bit due to his dad's Naval Career he settled in Manchester, NJ. He was a lifetime member... View Obituary & Service Information

The family of Harley "Pappy" Kopenhafer created this Life Tributes page to make it easy to share your memories.

Send flowers to the Kopenhafer family.