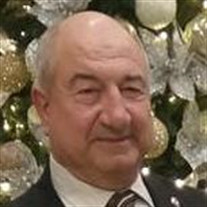 Horacio V. Miranda, 67, from Toms River, NJ died Wednesday, July 18, 2018, from injuries sustained in a vehicular accident in Wharton, NJ. Horacio was born in Oliveira do Bairro in Portugal to Manuel Pires de Miranda and Odete da Conceição Vieira on June 4, 1951. He came to the US in 1969 and married Maria Irene Miranda, (nee Feiteiro) on April 4, 1970, in Newark, NJ. He worked as a Construction Labor Steward for Berto Construction for 30+ years and was a member of Laborer’s Local #472. Horacio, also known by his friends as “Herc” and “Horse”, loved to entertain family and friends at his home in Toms River. He opened his home to all and made them feel welcomed and a part of his family. He will be missed by all whose lives he touched. Horacio is survived by his beloved wife Maria Irene of 48 years; his loving daughter, Odette, and son-in-law Ryan; his loving Son, Horacio Jr, and Wife Kelly, and cherished grandson Gavin; Mother Odete; Sisters Donzilia, brother-in-law Ernesto, Isaltina, Isabel, brother-in-law Afonso, and Brother Telmo; and nieces and nephews: Ernesto, Helder, Carla, Patricia, Jose, Raquel, Isabel, and Monica. He is predeceased by his Father, Manuel Pires Miranda. Visitation will be Monday, July 23, 2018 from 4:00-9:00 pm at Carmona-Bolen Funeral Home in Toms River, NJ. A final viewing will also be available Tuesday, July 24, 2018 between 8:30-9:30 am. Funeral services will be held at 10:00 am Tuesday, July 24, 2018 at St. Luke’s Roman Catholic Church, officiating. Burial will follow at Ocean County Memorial Park. Arrangements are by Carmona-Bolen Funeral Home. Memorial contributions may be made to: Ocean of Love, 1709 Rt. 37 E, Toms River, NJ 08753.

The family of Horacio V. Miranda created this Life Tributes page to make it easy to share your memories.

Send flowers to the Miranda family.