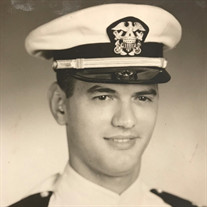 James Kolocotrones, age 81, of Toms River, died Saturday, Dec. 1 surrounded by his loving family. Born in New York City, he lived in Queens, NY, Miami, FL, Bayville, NJ and Plymouth, MI prior to moving back to Toms River in 1988. James was a proud graduate of the University of Oklahoma business school. He served in the US Navy on the USS Marias, which provided support during the Cuban Missile Crisis in 1961. He was employed as an International Marketing Manager for General Motors for 30 years until his retirement in 1995. His military service and his job at GM gave him the opportunity to travel the world, allowing him to visit six continents. He was passionate about politics and served as an election official in Ocean County for several years. He also had a love of classical music, which he instilled in all of his children. But above all else, James was a family man. He devoted his life to caring for his parents, his wife, his children and his grandchildren, all of whom adored him. He was predeceased by his parents, Peter and Anna Kolocotrones. James is survived by his wife of 50 years, Gertrude Kolocotrones nee Brolly, who was truly the love of his life; his children, Catherine Satzke and her husband, Klaus; Peter Kolocotrones and his wife, Claire Louise; and Jennifer Keeney and her husband, Kyle; and 8 grandchildren: Hannah, Josefine, Claudia, Julia, Caroline, Colette, Charlotte and Ruby. His family would like to thank the compassionate staff at Community Medical Center for providing such wonderful care in his final hours. In lieu of flowers, memorial contributions may be made to the US Department of Veterans Affairs. A private ceremony will be held at Brigadier General William C. Doyle Memorial Cemetery in Wrightstown, NJ.

The family of James Kolocotrones created this Life Tributes page to make it easy to share your memories.

Send flowers to the Kolocotrones family.