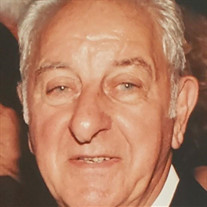 James Anthony Mazza, 89, of Toms River passed away peacefully at home on Thursday, August 5, 2021. James was a dedicated husband, father, grandfather and great grandfather and will be dearly missed by all his family and friends. He was honorably discharged from the U.S. Navy in 1956, after a four year tour. Where he served as an electrician's apprentice. He then became employed for General Instrument Corp. in Newark, N.J. as the company's lead electrician, eventually retiring from the company 45 years later. James and his beautiful wife Mary celebrated 55 years of marriage before she passed away in April of 2017. James loved boating and crabbing at the Jersey shore. He had an affinity for Cadillacs, especially black ones. Being a jack of all trades, he also enjoyed helping and repairing a multitude of things for family, friends and even strangers. For many years he enjoyed making homemade tomato sauce from scratch with his friends and family. James was predeceased by his beloved wife Mary of 55 years, his brother Salvatore, sisters Madeline Russo and Theresa Longo, along with granddaughter Candace Mazza. He is survived by his children Anthony and his wife Bernice of Northfield, James of California, Joseph and his wife Nancy of Clifton, and Paul and his wife Angela of Hamilton. He will be dearly missed by his granddaughters Lauren Frye, Jessica Hanley, Grace Mazza, and Gina Mazza and his greatgrandchildren, Jamie, Penelope, Brendan and Emily. He is also survived by his siblings Rita Mantineo and Anne Masino. A visitation will be held on Tuesday, August 10 from 9am-10:30am at "The Family Owned" Carmona-Bolen Home for Funerals, 412 Main Street, Toms River. A funeral mass will be offered 11am on Tuesday at Saint Justin's Church, Toms River. Burial will follow at Saint Joseph's Cemetery.

James Anthony Mazza, 89, of Toms River passed away peacefully at home on Thursday, August 5, 2021. James was a dedicated husband, father, grandfather and great grandfather and will be dearly missed by all his family and friends. He was honorably... View Obituary & Service Information

The family of James Anthony Mazza created this Life Tributes page to make it easy to share your memories.

Send flowers to the Mazza family.