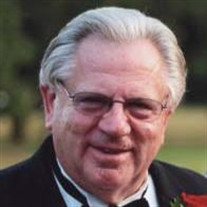 James V. Ryan, 74, of Island Heights, passed away on Monday, May 9, 2016. James served his country as a United States Marine from 1959-1963. James joined the NJ State Police, as a member of the 64th State Police Class, badge #1906. When he left the State Police, he went on to work for Puerto Rico Marine Management, where he retired after twenty years as Senior Vice President of Security. James went on to own several successful security businesses, most recently, Trionaid Associates of Toms River. He served on the Island Heights town council from 1991-2003, where he was Council President for 10 of those years. James was also a member of the Toms River Elks Lodge #1875, since June 1997 James was predeceased by his parents, James and Margaret and his sister Patricia. He is survived by his wife Denise, and children, Tracy, Jimmy and his wife Sheryl, John and his wife Janice, Holly Slack and her husband Greg, Christine McKay and her husband Scott, Sean and his wife Nicole, Meghan and Patrick. Also surviving are his grandchildren, Erin, Christopher, Kevin, Nathan, Jake, Noah, Charlotte, Zoe and Maeve and brothers, William and Dennis. A visitation will be held on Monday, May 16 from 1-3pm & 6-9pm at "The Family Owned" Carmona-Bolen Home for Funerals, 412 Main Street, Toms River. A funeral service will be offered at 11am on Tuesday at Saint Joseph Church, Toms River. Burial will follow at Ocean County Memorial Park, Toms River. In lieu of flowers, donations can be made in James' name to Memorial Sloan Kettering Cancer Center, https://giving.mskcc.org/ and Saint Jude Children's Research Hospital, www.stjude.org/

The family of James V. Ryan created this Life Tributes page to make it easy to share your memories.

Send flowers to the Ryan family.