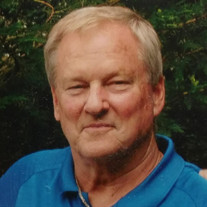 James (Jim) A. Wallete, 70 of Browns Mills, NJ, passed away peacefully on December 8th, 2019 after a battle with Pancreatic Cancer. Born in Philadelphia, Jim lived in Pennsylvania and Ohio before moving to Toms River, NJ and eventually settling in Brown Mills. Jim was a graduate of Neshaminy High School and Eastern Kentucky University. Jim worked most of his life in the insurance industry for several large corporations as well as owning his own business. Jim is survived by his beloved wife Susan of 23 years, his daughters Stephanie Bernardi, Aimee (Joseph) Sansotta, and his son, Thomas, along with the mother of his children, Margaret Wallete. In addition, he is survived by his grandchildren, Noah, Emma and Alyssa, as well as his brother Paul (Tracy) Wallete, his sister Kathy (Harry) Ellis and three nieces and a nephew. Jim is predeceased by his parents Albert and Margaret. Jim had several hobbies that he loved, but nothing was a better day to him than being on his boat, JAWS IV, with his wife, family and friends. Come Spring, Summer or Fall, Jim loved to spend time on Barnegat Bay, Tom's River and the ocean, boating, fishing, clamming and crabbing. Although he usually left empty handed, it was never a bad day for Jim to be on the water. He also loved golfing, and spending time with Sue, his kids and grandkids during the summer in North Myrtle Beach, SC. Jim and Sue's home was never quiet as they always had rescue dogs throughout the years. Jim loved to help others, whether it was fixing something at one of his daughter's houses or working with his son on their boats at the marina. The event itself was a backdrop to spending time with family and friends he loved. He was a huge supporter of his Philadelphia sports teams and often lost dinner bets to his son-in-law because Jim always bet the Eagles would win. In recent years, few things were better for him than spending time with his grandchildren. He was by far the best Santa they ever saw. A memorial celebration will be held on Friday, December 13th from 10am-12pm at Carmona-Bolen Home for Funerals, 66 Lacey Road, Whiting, NJ 08759. The family has asked in lieu of flowers, that memorial contributions be made in Jim’s memory to ReClam the Bay (http://reclamthebay.org/) to keep the place that Jim loved dearly ready for future generations, or to Pancreatic Cancer Action Network (https://www.pancan.org/) to help us one day find a cure for this horrible disease. Condolences can also be sent to the funeral home website at www.carmonabolenfh.com

James (Jim) A. Wallete, 70 of Browns Mills, NJ, passed away peacefully on December 8th, 2019 after a battle with Pancreatic Cancer. Born in Philadelphia, Jim lived in Pennsylvania and Ohio before moving to Toms River, NJ and eventually settling... View Obituary & Service Information

The family of James A. Wallete created this Life Tributes page to make it easy to share your memories.

Send flowers to the Wallete family.