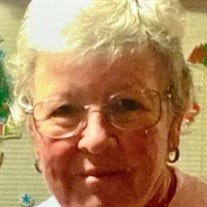 We are saddened and heartbroken to announce the passing of our mother, Janice Marie Malland who passed away peacefully, surrounded by family, on Saturday, May 14th at the age of 77. Janice was born on February 13, 1945 in Jersey City, New Jersey to William and Lillian Rundle. She was the second oldest of four daughters. As a child, Janice moved to the Belford section of Middletown Township with her family where she lived until her mid-20’s. It was during that time that she met and married Donald Malland. The pair eventually moved to Toms River in 1971, where she lived until her death. Janice is survived by her three sons, Mark, Scott, and Todd, her two daughter-in-law’s, Linda and Melissa, and her eight beloved grandchildren, Drew, Ashley, Courtney, Hayley, Matthew, Paul, Christopher, and Nicholas. She is also survived by three nieces Laurie Jarius, Sherrie Jarius, and Amy Ploumitsakos, as well as three nephews, Thomas Oswald, Brian Talty, and Blair Talty. Besides raising her three sons, Janice worked for 30+ years as a legal secretary/office manager for Hiering, Gannon, and McKenna, Esq., in Toms River. Throughout her life, she worked tirelessly to help her sons, their families, and her greatest joy, her grandchildren. As a lifelong member of St. Joseph’s Roman Catholic Church in Toms River, Janice was heavily involved in St. Joseph’s Grade School and St. Joseph’s High School (now Donovan Catholic) serving as an executive board member of both the PTA and Booster Club. She also served as a member of other committees and organizations while her children attended both schools. More recently, she spent many years involved in the parish as part of the St. Vincent de Paul Society and the Rosary Alter Society, to name a few. She was also very active in volunteering her time to help those in need. Janice was a 21-year breast cancer survivor before ultimately succumbing to this horrible illness. She fought valiantly, battling many years of radiation and chemotherapy treatments. Although it was no easy task, enduring years and years of treatment, she never complained and never gave up always relying heavily on her faith. Janice is pre-deceased by her mother and father, William and Lillian, her sisters, Joan Jarius, Judy Oswald and Jackie Talty, her brother-in-laws, Herman Jarius, Thomas Oswald, and Raymond Talty, as well as her nephew, Eric Oswald, and daughter-in-law, Julie Malland. At her request, there will not be a viewing. There will be a funeral mass at St. Joseph’s Roman Catholic Church in Toms River on Friday, May 20th at 11:30am. Interment will follow at St. Joseph’s Cemetery on Cedar Grove Road in Toms River. In lieu of flowers, donations, in the name of Janice Malland, can be made to St. Vincent de Paul Society, the St. Joseph’s Rosary Alter Society (https://ssvpusa.org/donate/), or the American Cancer Society (https://donate3.cancer.org/).

We are saddened and heartbroken to announce the passing of our mother, Janice Marie Malland who passed away peacefully, surrounded by family, on Saturday, May 14th at the age of 77. Janice was born on February 13, 1945 in Jersey City, New Jersey... View Obituary & Service Information

The family of Janice Marie Malland created this Life Tributes page to make it easy to share your memories.

We are saddened and heartbroken to announce the passing of our...

Send flowers to the Malland family.