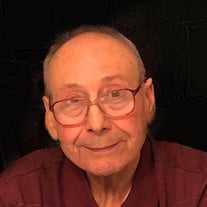 Gaspare “Jasper” Cannella, 83, passed in peace on Wednesday June 12, 2019 surrounded by his family at St. Barnabas Hospital. Jasper was born in San Giuseppe, Sicily and emigrated to the United States in 1946. He was one of six children born to Maria (Polizzi) and John Cannella. He graduated Bloomfield high school and Blomfield Technical Institute. He served in the Korean War in 1956. Upon completion of his duty, he was recruited by Mercedes Benz. He owned and operated J & J Auto Body as a mechanic. Then worked at Exxon Gas Station as a mechanic in Newark. Jasper was instrumental in forming the Italian American club in Belleville, NJ and eventually managed Casa Polizzi restaurant in the 1980’s. He completed his working years with Jersey Carpetina. He retired to Hope, NJ and eventually moved to Toms River, NJ until 2014. He spent his remaining years living in Roseland, NJ. He resided in Bloomfield, NJ up until 1995 where he raised four children He is survived by his children, Maria & Joseph Ponzio of Roseland, NJ; Madeline & Peter Casale, Stroudsburg, PA; John & Lisa Canella of East Hanover, NJ; Laura & Larry Corbo, Belleville, NJ and his eight grandchildren Alexandra, John, Lauren, Jared, Gianna, Gabriella, Larry and Jojo and his two great grandchildren, Lexi and Lucas. He is also survived by numerous nieces, nephews, and great nieces and nephews. He was predeceased in death by his parents, Maria & John Cannella, his siblings Salvatore (Sam) Cannella, Mamie Gambino, Theresa Cangelosi, Frank Cannella & Charlie Cannella. Viewings will be held Friday, June 14, 2019 from 3:00pm – 8:00pm and Saturday 8:00am-9:00am at Carmona-Bolen Home For Funerals, 412 Main St., Toms River, NJ 08753. A funeral mass will be held 9:30am on Saturday, June 15, 2019 at St. Maximilian Kolbe Church located in Toms River, NJ. Entombment will follow at the Ocean County Memorial Park in Toms River, NJ. In lieu of flowers, memorial contributions can be made to St. Jude Children’s Hospital, 501 St. Jude PL, Memphis, TN 38105-9959. Condolences can be sent to: www.carmonabolenfh.com

Gaspare &#8220;Jasper&#8221; Cannella, 83, passed in peace on Wednesday June 12, 2019 surrounded by his family at St. Barnabas Hospital. Jasper was born in San Giuseppe, Sicily and emigrated to the United States in 1946. He was one of six children... View Obituary & Service Information

The family of Jasper "Skippy" Cannella created this Life Tributes page to make it easy to share your memories.

Send flowers to the Cannella family.