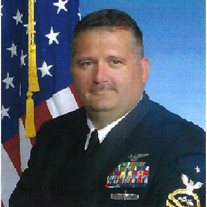 Jefferey Peter Murray, of Toms River, NJ, passed away unexpectedly on November 19, 2021, at the age of 62, while on vacation in Florida. Jeff is survived by his wife, Cindy Sturm, of Toms River, NJ, his son Ryan, age 29, of California, MD, and by his mother, Mary Elizabeth McCarthy, of Sandford, ME. He is also survived by a host of loving siblings and relatives, dear friends, and Clarabelle. Jeff was born in Brockton, MA and moved to Sandford, ME with his family at age 9. He enlisted in the United States Navy in Portland, ME in March 1979 at age 19 and served 26 years active duty, four years reserve duty, culminating in 30 years of naval service. He retired as Senior Chief Petty Officer (Aviation Support Equipment Technician) in June 2005. During his naval career, Jeff was assigned to twelve different Commands, with a mix of independent and staff duty; as well as completed five major deployments on three aircraft carriers - USS AMERICA (CV 66), USS CARL VINSON (CVN 70) and USS ABRAHAM LINCOLN (CVN 72). He deployed to the Mediterranean and Indian Oceans, and the Arabian Gulf during Operations Desert Shield and Desert Storm. During his final tour of active duty at Navy Lakehurst (now known as Joint Base McGuire Dix Lakehurst), Jeff served as Assistant Department Head/LCPO of Air Department and as Senior Enlisted Advisor. Following his retirement from the military, Jeff was hired into the federal government at Navy Lakehurst as a Logistics Manager on the Corrosion Control and Hydraulics teams. After 9+ years, he retired as a GS-13 Deputy Program Manager for Logistics, in May 2015. Jeff always said the best thing about spending his final active duty tour at Navy Lakehurst was meeting his wife Cindy, and their subsequent marriage in October 2009. Jeff loved football and baseball (a devoted NYM fan), yearly beach vacations to the Outer Banks, trips to the lovely seashore town of Vero Beach, FL, time spent with the best friends and family ever, and of course, the annual magic of Disney, with beloved family team members, Cindy, Tom, Allie, and Janet. Jeff’s passions were making everyone smile and laugh at his sweet, silly jokes, enjoying spending time in the sun and warmth, and traveling with his wife wherever life took them. Visitation will be on Monday, Nov 29, from 4 – 8pm at Carmona-Bolen Home for Funerals, 412 Main St., Toms River, NJ 08753. On Tuesday, Nov 30, a service will be held at 10:00 at Carmona-Bolen Home for Funerals; followed by the funeral service at 12:30 at Brigadier General William C. Doyle Veteran’s Memorial Cemetery, 350 Province Line Rd., Wrightstown, NJ 08562. In lieu of flowers, donations may be made to Deborah Hospital Foundation, or American Diabetes Association.

Jefferey Peter Murray, of Toms River, NJ, passed away unexpectedly on November 19, 2021, at the age of 62, while on vacation in Florida. Jeff is survived by his wife, Cindy Sturm, of Toms River, NJ, his son Ryan, age 29, of California, MD,... View Obituary & Service Information

The family of Jefferey P Murray created this Life Tributes page to make it easy to share your memories.

Send flowers to the Murray family.