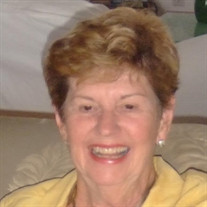 Ocean Grove, NJ - Joan Montague, 85, passed away on February 19, 2019, surrounded by the love of her family. Born in Philadelphia, Joan moved to Toms River, where she raised her family. In 1990, she moved to Tequesta, FL and later to Stuart, FL before moving back to New Jersey in 2013. Joan was a kind and loving mother of 4 daughters: Susan Horwath (Bill), Flagler Beach, FL; Maureen, who sadly passed away at age 5 of cystic fibrosis; Meghan Varner (Wayne), Jupiter, Florida; and Kelly Josberger (Stuart), Neptune City, NJ. Joan’s niece Patti, Wellington, FL, who is considered to be her “fifth daughter.” Joan also has 10 grandchildren, Justin, Matthew, Lauren, Dylan, Brooke, Hannah, Erin, Hunter, Austin, and Misha, and 8 great grandchildren, JJ, Daralyn, Delaney, Bristol, Cayson, Riley, Jaxson, and Payton. Joan had a career in banking which started in 1979 at the First National Bank of Toms River. She returned to College in the late eighties at Georgian Court University and got her degree in business in 1989. She moved to Florida with her mother in 1990 and while living there began a career in retail. She worked for Bloomingdales, and later at Jacobson’s Department Store. In 2004, she retired and moved to Stuart, Florida, where she focused on visits with her children and grandchildren. For many years, Joan was involved in volunteer work in Toms River. She was the President of the White Pine Twig and together with a group of hard working women, raised thousands of dollars to support the Community Memorial Hospital, which is now Community Medical Center. Additionally, she volunteered for the Garden State Philharmonic and the Cystic Fibrosis Foundation. Joan was also the President of the Ladies Auxiliary of the Toms River Yacht Club. Some of her favorite interests include playing cards; she was an avid Bridge player for over 50 years. She was a loving, kind woman with a great sense of humor. In lieu of flowers, please consider making a donation to the Cystic Fibrosis Foundation. https://www.cff.org/

Ocean Grove, NJ - Joan Montague, 85, passed away on February 19, 2019, surrounded by the love of her family. Born in Philadelphia, Joan moved to Toms River, where she raised her family. In 1990, she moved to Tequesta, FL and later to Stuart,... View Obituary & Service Information

The family of Joan B Montague created this Life Tributes page to make it easy to share your memories.

Send flowers to the Montague family.