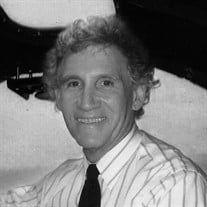 PERLMUTTER—Joel Ellis, 80, died at his home in Toms River surrounded by his loving family on Friday, March 3, 2017. He was the devoted husband for 39 years to Lynn Madison Perlmutter, whom he met as friends and became lifetime partners. He is survived by his brother Michael Perlmutter (Marlene), his children Stuart Perlmutter (Amy), Kevin Rand (Jill), Jennifer Perlmutter- Russo (John), Tammy Breen (Michael), Julie Heise (Fred), Darren Rand, Brett Rand (Daniela), and his grandchildren Shawn, Keith, Raquel, Adam, Megan, Jake, Brian, Debra, Paige, Jared, Joshua, Jeremy, Carly, Andrew, and new great grandchild, Benjamin. He was predeceased by his sister Barbara Marder. He was born on December 12, 1936 in Jersey City, NJ, where he graduated from Lakewood High School and Rider University’s School of Business. Joel began his career working for his father Julius, who owned a meat and produce market. Favorite memories included evening rides through the farmers’ fields where they would wash vegetables in a tub. At the end of the day, he and his sister would fall asleep in the back of the truck. He took these early life lessons and in 1961 went to work for his father’s small supermarket, after a stint in the National Guard. His father had great faith in Joel’s abilities and drive. This faith in him became a reality as Joel rose to become the CEO of Perlmutter Family Shoprites – Perlmart, Inc.(part of Wakefern Food Cooperative). Today, Perlmart, Inc. owns and operates Shoprite stores throughout Southern NJ. Joel was a long time supporter of his alumna, Rider University and many charities and causes, most notably, Ocean of Love and the Valerie Fund for Children with Cancer. He served on many boards including Wakefern Food Corporation, and Ocean County College Foundation. He enjoyed every minute with Lynn, the love of his life and his adoring family. The warm colors of this world were dimmed today by the loss of a man who brought joy, humor, generosity and charity to so many lives. Relatives and friends are invited Monday, beginning at 11:30 am, to Congregation B’nai Israel, 1488 Old Freehold Road, Toms River, NJ, where funeral services will begin promptly at 12:00 pm. Interment Ocean Memorial Park. Family and friends are welcome to return to the Perlmutter Social Hall at Congregation B’nai Israel. Contributions in his memory may be made to the Joel and Lynn Perlmutter Family Foundation, 954 Route 166, Toms River, NJ 08753.

PERLMUTTER&#8212;Joel Ellis, 80, died at his home in Toms River surrounded by his loving family on Friday, March 3, 2017. He was the devoted husband for 39 years to Lynn Madison Perlmutter, whom he met as friends and became lifetime partners.... View Obituary & Service Information

The family of Joel Perlmutter created this Life Tributes page to make it easy to share your memories.

PERLMUTTER—Joel Ellis, 80, died at his home in Toms River surrounded...

Send flowers to the Perlmutter family.