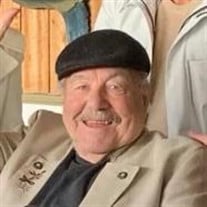 Johannes Ernst Bomm, age 93, of Jackson, passed away Saturday, January 2, 2021 at Community Medical Center, Toms River. Born in Dorsten, Germany, he immigrated to the United States in 1960. Johannes lived in Sayreville, NJ before moving to Jackson in 1972. He became a widower in 1976 and has been married to his current wife, Hilde Bomm (nee Oetjen), for 28 years. Johannes worked as a plumber for Dufek Plumbing before his retirement in 1989. He enjoyed his many Grand and Great Grandchildren and traveling back to his native Germany. Johannes was a proud member of the Trenton German Club and the Deutscher Club of Clark. He was predeceased by 5 siblings, and his first wife 28 years, Gertrud. Johannes is survived by his beloved wife Hilde Moellering Bomm (nee Oetjen), his children; Hans-Peter Eric and his wife Linda of Sayreville, NJ, Uwe Johannes of Frankfurt, Germany, Andreas of Washington, and his stepchildren; Rainer Moellering and his wife Diane of Toms River, NJ, Marian Friesema and her husband Barry of Toms River, NJ, and Monika McCluskey and her husband Richard of Mountainside, NJ. He is also survived by his Grandchildren; Damian, Desiree’, Nicole, Jessica, Jennifer, Sandy, Trevor, Nicole F., Ryan, Kaitlyn, and Cameron, and 13 Great Grandchildren. Visitation hours will be held on Friday, January 8, 2021 from 4:00pm to 7:00pm at the “The Family Owned” Carmona Bolen Home for Funerals, 412 Main St., Toms River. A service will be held 6:30pm on Friday at the funeral home. Condolences can be sent to [email protected]" title="Click to open in a new window or tab" target="_blank" rel="nofollow noopener">[email protected]

The family of Johannes Ernst Bomm created this Life Tributes page to make it easy to share your memories.

Send flowers to the Bomm family.