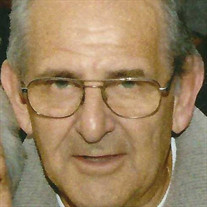 John (Jack) Beraud, 88 years old, of Berkeley Township passed away on October 26, 2021 at home. He was born on March 1, 1933 to Paul F. Beraud, Sr and Charlotte Louise Beraud Nee Shanks. A few hobbies John liked was fixing computers from scratch without using books or instructions, he also loved the water whether it be at sea or land. He was very mechanically inclined and a jack of all trades from fixing cars to construction, electrical work, plumbing, boilers, etc. There was nothing he couldn't do. John belonged to the Knights of Columbus, the VFW and AFL-CIO. He attended mass at St Maximillian Kolbe. He was a veteran from the army serving in the Korean War. He was also a Merchant Marine. Some of his favorite foods were steak, curry chicken, pork chops, noodles, milky ways and dessert. He also liked asparagus, artichokes and Hi C orange drinks. John is predeceased by his mother Charlotte Louise Shanks and father Paul Beraud, Sr in addition to two brothers Paul Beraud , Jr (Chubby) and Francios Beraud (Beau) and a granddaughter Courtney and a great grandchild. He is survived by one sister Suzanne (Beraud) Adamo and his wife Janet P Beraud (Nee Greenwaldt) for over 64 years. He has four daughters, Jacqueline Lomovsky, Kim Marie Marzo, Michele Ann McNaughton and Kelly Jean Beraud. He is also survived by his grandchildren Peter, Kerri Ann, Janet, Danielle, Jessica, Kristen, and Gary along with 18 great grandchildren. Services will be as follows : Mass will be Monday November 8th 9:45 AM at St Clares Church 110 Nelson Ave Staten Island , NY 10308. Interment will follow at Moravian Cemetery. A luncheon will immediately follow at La Fontana Italian Restaurant 2879 Amboy Rd SI, NY 10306. Family requests that flowers are not sent. In Lieu of flowers donations can be made in John's name to Sloan Memorial Kettering.

The family of John P Beraud created this Life Tributes page to make it easy to share your memories.

Send flowers to the Beraud family.