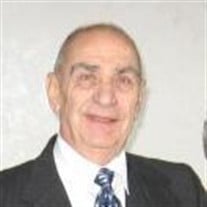 John Joseph Franchi Jr. was born on May 24, 1932 in the Bronx, NY. He was the eldest son of John J. Franchi Sr. and Augusta (Kitty) Grolnick. He attended high school in NYC, leaving early to join the Air Force in December of 1949. He served during the Korean War. At the time of his discharge in 1953, he had attained the rank of Staff Sergeant. He served as a meteorologist and weather observer while stationed in Iceland; he flew into hurricanes and over the volcano in C-47 Dakotas. While on a 2 week leave he married his childhood sweetheart, Fay Mirro. John held several jobs during his life from book binding, shipping & delivery and trucking dispatch. He worked at multiple companies in the trucking industry. At Nelmar Trucking he rose up to Vice President. His final job was Operations Manager for Conrail/Pennsylvania Truck Lines. As a high school student, he was a soda jerk for Izzy Cohen’s in the Bronx. He raised his family in the Bronx, then moving to Tinton Falls, NJ in 1971 After he retired to Pine Ridge in Whiting, NJ, he was active in several organizations, including the Old Guard and a five year stint as Chief of the Safety Patrol. John was a diehard Giants Football & Yankees Fan. A lifelong fisherman, he also loved bowling, bocce and was an incredible story teller. Sunday dinners were planned around the Giant’s halftime. John is survived by his wife of 66 years Fay; four children, Gail (Gil) Byrnes, Lisa (Bob Adams) Franchi, John Franchi III, James (Eve) Franchi; four grandchildren; Tara (Chris) Heagele, Skip (Angela) Byrnes, Guenivere Franchi & Kevin Franchi. The light of his final two years was his great granddaughter, Arden Byrnes. He is also survived by his brother Alfred (Pat) Franchi and sister Louise Paluzzi, who were also his neighbors and friends. He leaves many nieces, nephews and half-sisters. He was predeceased by his parents, and a brother James (Jimmy Boy) Franchi.

John Joseph Franchi Jr. was born on May 24, 1932 in the Bronx, NY. He was the eldest son of John J. Franchi Sr. and Augusta (Kitty) Grolnick. He attended high school in NYC, leaving early to join the Air Force in December of 1949. He served... View Obituary & Service Information

The family of John J Franchi Jr created this Life Tributes page to make it easy to share your memories.

Send flowers to the Franchi family.