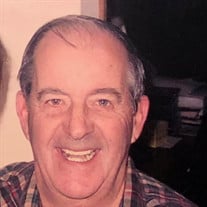 Joseph Edward Fischer passed away peacefully at Community Hospital in Toms River, N.J. with his loving wife Elaine close by. God decided to call him home on Saturday, July 11, 2020 on their 53rd anniversary. Joe was born and grew up in Newark, NJ. He was the fourth of five children born to parents William Rupert Fischer and Kathleen Ryan Fischer. He took pride in telling stories about his father's family who had come from Germany, and settled in Pittsburgh, PA. When the family visited the grandparents' farm in Pittsburgh that is when Joe would learn about gardening, fixing machinery, building and much more. He took these skills through life and passed them on to his children. He also took great delight in fishing with his Irish grandfather on his mother's side. His first job was working on a charter fishing boat each summer. He developed a deep love of the ocean. He became an avid fisherman and enjoyed very much sharing this activity with his children. Joe worked for National Starch and Chemical in Plainfield, NJ. He worked at many positions for them including operating a small packaging plant in Towaco, NJ. He returned to the main office in Plainfield for a few years as a purchasing agent. He retired after twenty-seven years of dedicated service. He then changed careers to a sales engineer for two different companies. He enjoyed the change. While doing this he always worked a second job which would involve construction in one form or another. He could build or rebuild anything. His talent was unending. He also passed these skills on to his children. The project that gave him the greatest pride and enjoyment was buying a three-room house on five acres of land in Succasunna, NJ. He and his wife Elaine saw great potential in the freshwater spring and country beauty beyond words. Joe proceeded to plant a 50' by 100' garden and planted 400 Colorado Blue Spruce trees. He turned the three-room house into a beautiful home. He was a member of the Roxbury Board of Health for many years and served as president for a few of those years. He is predeceased by his brother William Rupert Fischer Jr. who was killed in the Korean War, his sisters Kathleen (Patsy) Fischer, Eileen Fischer Schroeder, and his son David W. Fischer (July 21, 1993). He is survived by his wife Elaine M. Criss Fischer, his sister Susan Fischer Benson and husband Brent; his daughters Jeanne L. Montross Fischer, Lorraine G. Fischer Norton, and husband John (Randy), Elaine B. Fischer Foxall and husband John Michael; his sons Daniel J. Fischer, Jeffrey N. Fischer and wife Melody, Robert E. Balcerski and wife Kathy, Brian D. Balcerski and loving companion Miki, Kenneth M. Balcerski and wife Clair; his grandchildren Amanda, Danielle, Eli, Ashley, Michael, Jeffrey, Megan, Sara, Kyle, Chris, Clarice, John (Jack), Elizabeth A., John Joseph; and his many great grandchildren. He had a large loving family and will be greatly missed.

Joseph Edward Fischer passed away peacefully at Community Hospital in Toms River, N.J. with his loving wife Elaine close by. God decided to call him home on Saturday, July 11, 2020 on their 53rd anniversary. Joe was born and grew up in Newark,... View Obituary & Service Information

The family of Joseph Edward Fischer created this Life Tributes page to make it easy to share your memories.

Send flowers to the Fischer family.