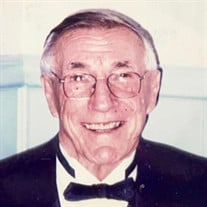 Joseph T. Ruggiero passed away on Wednesday January 13, 2021. Having spent 15 months in a world without his beloved wife Carol, Joe&#8217;s heart finally said, &#8220;enough is enough.&#8221; It is assumed he greeted Saint Peter with some good-natured... View Obituary & Service Information

The family of Joseph T Ruggiero created this Life Tributes page to make it easy to share your memories.

Send flowers to the Ruggiero family.