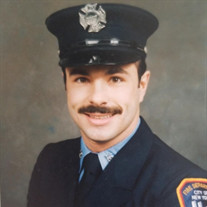 Joseph P. Wainwright Sr., 60, passed away suddenly in the early morning hours on Friday, March 15, 2019, in the comfort of his own home in Toms River, New Jersey. Joseph was born June 1, 1958 in Brooklyn, New York. He left behind decades worth of great accomplishments, his most cherished being his beloved family. Joe is survived by his loving wife Cynthia, daughter Nicole Reider and son-in-law Donald Jr., his daughter Jaclyn Travers and son-in-law Tanner, his son Joseph Jr., and his granddaughter Gianna. He also leaves behind his parents John and Rose Wainwright, his brother John and sister- in-law Denise, his brother Michael and sister-in-law Deborah, his sister Gail O’Brien and brother-in-law Michael, and his sister Cathy Wainwright and her wife Denise. Joe also leaves behind many nieces, nephews, cousins, aunts, uncles, and friends. Joe started his long career in sports back in the 1970s where he attended Tottenville High School in Staten Island, New York. He was a two sport athlete who was named an All Star Athlete twice for football and twice for wrestling. During his senior year at Tottenville High School, Joe was selected as a Football All Star and was named the Defensive Lineman Most Valuable Player on the 1975 team. He also accomplished the title as the New York City Wrestling Champion in the 190 pound class in 1975 and 1976. After his graduation from Tottenville High School, Joe attended Wagner College on a scholarship to play football, where he also wrestled from 1976-79. In 1980, he became the interim Wrestling Coach at Wagner College and was later named the head Wrestling Coach at Monsignor Farrell High School from 1982-1990. Amidst all of these accomplishments, Joe then entered a career in the New York City Fire Department from 1982 - 1990. He then married his wife Cindy on September 9, 1984. Joe continued his professional career after leaving the New York City Fire Department in 1990 as a Property Manager for the Benneton family, managing several buildings in New York. Visitation will be held at the Family Owned Carmona-Bolen Home for Funerals 412 Main St., Toms River, NJ Monday, March 18, 4:00pm - 8:00pm, Tuesday, March 19, 9:00am - 10:00am, followed by the Funeral Mass to be held 10:30am at St. Luke's RC Church 1674 Old Freehold Road, Toms River In lieu of flowers the Family requests donations to be made in Joseph's name to the Tottenville High School Athletic Department. 100 Luten Ave., Staten Island, NY 10312

Joseph P. Wainwright Sr., 60, passed away suddenly in the early morning hours on Friday, March 15, 2019, in the comfort of his own home in Toms River, New Jersey. Joseph was born June 1, 1958 in Brooklyn, New York. He left behind decades... View Obituary & Service Information

The family of Joseph P Wainwright, Sr. created this Life Tributes page to make it easy to share your memories.

Joseph P. Wainwright Sr., 60, passed away suddenly in the early...

Send flowers to the Wainwright, family.