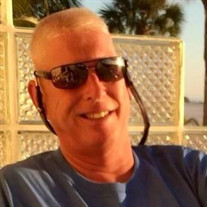 Lee Martin Dippold passed away at the age of 62 on the evening of December 11, 2021, surrounded by family and loved ones at Physicians Regional Hospital in Naples, Florida. Lee was born on February 24, 1959, in Point Pleasant, New Jersey, to parents Paul Dippold and Dorothy Elliott Dippold. Born and raised in New Jersey, he graduated from Brick Township High School. Lee served as a lieutenant with the Ocean County Sheriff’s Department and the Ocean County Corrections Department for twenty five years retiring in 2006. Lee married the love of his life Debbie Ravalese on October 27, 1985, in Patterson, New Jersey. They settled in Toms River, New Jersey, while also seasonally residing in Naples, Florida. They spent the last 36 years of their lives happily married. Lee enjoyed spending time with his family and friends. He enjoyed visiting the beach and fishing spending most of his summers around the pool or at Island Beach State Park and most of his winters at his home in Naples, Florida, with his wife. Lee had a zest for life and lived each day to the fullest. In addition to his parents, Lee Dippold is preceded in death by his brother William Dippold. He is survived by his wife Debbie Dippold, daughter Amanda Dippold, son Paul Dippold, daughter in law Taylor Dippold, and sister Kathy Coyte as well as many in-laws, cousins, nieces, and nephews. A mass service will be held at Saint Joseph’s Roman Catholic Church in Toms River, New Jersey, at 10:00 am on January 3, 2022. In lieu of flowers, donations can be made on behalf of Lee Dippold to Saint Jude Children’s Research Hospital or Memorial Sloan Kettering. The family of Lee Dippold would like to extend our sincerest gratitude to Physicians Regional Hospital as well as Dennis Sparks from Hodges-Josberger Funeral Home, Joyce Bolen and Patrick Piccoli from Carmona Bolen Home for Funerals, and Liz Hemberger of Saint Joseph’s Roman Catholic Church. We would also like to thank all of our family, friends, and neighbors who have offered their support during this difficult time.

Lee Martin Dippold passed away at the age of 62 on the evening of December 11, 2021, surrounded by family and loved ones at Physicians Regional Hospital in Naples, Florida. Lee was born on February 24, 1959, in Point Pleasant, New Jersey,... View Obituary & Service Information

The family of Lee M. Dippold created this Life Tributes page to make it easy to share your memories.

Lee Martin Dippold passed away at the age of 62 on the evening...

Send flowers to the Dippold family.