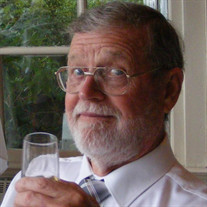 Lewis M. Clayton, 90, of Beachwood, passed away quietly in his home on Sunday, January 16, 2022. Born in Pleasant Plains, NJ to Charles and Janice, Lew met the love of his life, Mary, at Toms River High School (South - Class of 1949). The couple wed in 1951 at the Cathedral of the Air in Lakehurst, NJ before Lew traveled to Germany with the United States Army. Upon his return, Lew and Mary moved to Beachwood to start a family and a business. Founder and proprietor of Clayton Construction Company until his retirement in 1990, Lew built more than houses in Beachwood: he built a family, a community of friends, and, with the help of his two sons, a successful construction company that provided homes for many of their neighbors. He was an active member of the Beachwood-Berkeley Rotary and the Toms River Elks. Lew served on the Beachwood Planning Board from 1971-2007 and was a long-standing member of the Beachwood Republican Club. Lew Clayton was honored for his community service and named Citizen of the Year by the Borough of Beachwood in 2007. Known for enjoying a good time as much as valuing a job well done, Lew Clayton was equal parts diplomatic tradesman and social delight. Predeceased by his sons, Tom and Chris, Lew is survived by his true love and wife of 70 years, Mary; his daughter, Jane Hoyt; his daughter-in-law, Beverly Clayton, and many dear nieces and nephews. Lew deeply impacted the lives of his grandchildren: Amber J. Clayton; Lewis T. Clayton, Jr. and wife Melissa; John-Paul Hoyt and wife Lindsay; Patrick Hoyt and wife Josie; Katie LaPreta; Charlene Meza and husband Faustino; Andrew Clayton and wife Jennifer. An enthusiastic guest at family weddings, Lew proudly watched his family grow to include eleven great-grandchildren: Donovan, Annika, Brooke, Grace, Brandon, Arya, Jonas, Jeremy, Dashiell, Elizabeth, Hailey. Visitation will be held from 2-4 and 7-9 p.m. on Friday, January 28, 2022 at Carmona-Bolen Funeral Home 412 Main Street in Toms River. In lieu of flowers, memorial contributions can be sent to Alzheimer’s Foundation of America. Condolences can be sent to Carmona-Bolen.

Lewis M. Clayton, 90, of Beachwood, passed away quietly in his home on Sunday, January 16, 2022. Born in Pleasant Plains, NJ to Charles and Janice, Lew met the love of his life, Mary, at Toms River High School (South - Class of 1949). The couple... View Obituary & Service Information

The family of Lewis M Clayton created this Life Tributes page to make it easy to share your memories.

Lewis M. Clayton, 90, of Beachwood, passed away quietly in his...

Send flowers to the Clayton family.