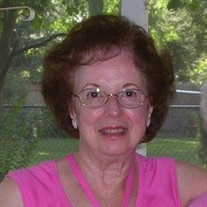 Louise Brown Tully, entered eternal rest at Jersey Shore University Medical Center in Neptune, NJ on Monday, July 26, 2021 after having been involved in a terrible car accident four days earlier. Up until that fateful moment, Louise lived her 92 very active years independently and with gusto. Throughout her life she loved traveling to many different countries on her vacations from work. She had so many experiences and stories to tell, and we loved hearing about them. Louise was born in 1928 in Hackensack NJ to J. William Brown and Emma Brown (nee Noble). She was preceded in death by her husband Charles Perkins Tully III, originally from Camden NJ, who passed away in 1964 from cancer, as well as her first great nephew Patrick Taylor Rohal of Jeannette PA, who passed away in 2017. She is survived by her brother William Noble Brown and his wife Elke (nee Bartels-Spero) of Paramus NJ, as well as her beloved nieces and nephews,Jean Marie Rohal (nee Brown) and her husband Jeff Rohal of Jeannette PA, Joanne Louise Brown & her husband Ken Wiren of Orford NH, Kevin Taylor Brown & his wife Rachel Heller of Mebane NC, and Steven Patrick Brown of Jeannette PA; her great nieces and nephews, Angela Marie Rohal of Jeannette PA, Taylor Erik Brown and his wife Lyz (nee Victor) of Elon NC, Nicole Lynn Wilkerson (nee Brown) and her husband Devin Wilkerson of Burlington NC, Eva Zelson and her husband Jeremy Cole of Marlton NJ, and Leah Zelson of Chapel Hill NC; her great-great nieces and nephews, Bethany Lynch of Elon NC, Levi Douglas-Cole Wilkerson and David Rhett Wilkerson, both of Burlington NC. Additionally she is survived by so many loving cousins and their children, but most notably, her cousin and God-daughter Karen (and Rich) Iosua (nee Dentz) of Indian Wells CA, the daughter of Louise’s cousin Molly Sellarole Dentz, and her cousin Gregory (& Yanet)Noble of Middletown NJ, the son of Louise’s cousin Billy Noble. Louise grew up in Hackensack and then Maywood and graduated in the top 10 of her class from Bogota High School in 1946. She was employed as the Inside Sales Manager at General Rubber Corp in Carlstadt NJ where she met and married her husband Charles. After Charles’ death and after moving back to Hackensack, she worked in Inside Sales at ADP in Clifton NJ followed by Inside Sales at Myron Manufacturing in Maywood NJ. Louise was lovingly referred to as “Salesman Sam” because she could sell most anything to anyone. Upon full retirement, Louise moved to Whiting Station in Manchester Twp NJ where she made many friends and enjoyed herself for the next 26 years. Final arrangements are being handled by Carmona-Bolen Funeral Home in Whiting NJ. Despite her zest for life, Louise was a private person and has respectfully asked that there be no wake or funeral services at all. Louise wished to be cremated and have her cremains interred with her husband at Cedar Lawn Cemetery in Passaic NJ privately.

The family of Louise Brown Tully created this Life Tributes page to make it easy to share your memories.

Send flowers to the Tully family.