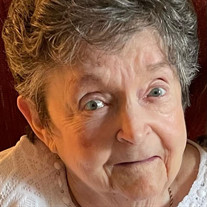 Margaret Rogers, 89, of Cranford, NJ passed away peacefully on April 22, 2022, after a long and abundant life. She was born on December 12, 1932, in Newark NJ to the late Mary (Marie) and Jerome Cotter. In addition to her parents, Margaret was predeceased by her husband Robert (Bob) in 2005, and her stepfather Joseph (Bob) Ganchou in 1995. Left to cherish her memory are her four children, Lynn Rogers, Gail Horvath and her husband Stephen, Diane Labella and her husband Rocco, and Grant Rogers and his wife Allisen. She also leaves seven grandchildren, Jennifer, Timothy, Joseph, Colleen, Daniel, Owen and Ian, and five great-grandchildren, Luke, Alex, Quentin, Emelia and Michael. Margaret grew up in East Orange, eventually moving to Verona and then to Montclair, where she raised her family. As a young woman, she worked in her family's business, Cotter Precision Wire Products, until it closed in 1966. After spending the next several years at home, she then returned to work as a bookkeeper for Forest Hill Field Club in Bloomfield, and later joined Johnson Buick in Montclair. Margaret eventually retired in 1994 from Montclair Leasing in Chester. While raising her children she volunteered as both a Girl Scout Troop Leader and a Cub Scout Den Mother, and spent countless hours volunteering in the school cafeteria. She was active in the Verona Junior Women's Club, where she served two terms as its' President, and also in the Montclair Women's Club. Remarkably creative, she enjoyed crafting, and hand-made wreaths, ornaments, ceramic pieces, and various other home decor. However, her real passion was cooking. She loved to cook and she was great at it. She often took gourmet cooking classes, and would spend all day Sunday experimenting with new recipes for the family to try. She even prepared gourmet lunches for her children to take to school. No dish was beyond her ability - or at least her effort! After the death of her husband in 2005, failing health led to Margaret's need to move to Atria Assisted Living in Cranford NJ where she resided until just before her death. During her more than 16 years there she formed many friendships with both residents and staff. Everyone knew her and she knew everyone. She truly considered Atria her "home" and her family is deeply grateful for the loving, supportive community at Atria that embraced her all those years. Family and friends are invited to gather to remember Margaret and celebrate her life on Sunday, May 1 from 10:30 am to 12:30 pm at the Carmona-Bolen Home for Funerals, 412 Main Street, Toms River New Jersey. A memorial service will begin at 11:00. Burial will be private at New Jersey Veterans Memorial Cemetery in Wrightstown, NJ. In lieu of flowers, donations can be made in Margaret's name to St. Jude's Children's Research Hospital.

Margaret Rogers, 89, of Cranford, NJ passed away peacefully on April 22, 2022, after a long and abundant life. She was born on December 12, 1932, in Newark NJ to the late Mary (Marie) and Jerome Cotter. In addition to her parents, Margaret was... View Obituary & Service Information

The family of Margaret Rogers created this Life Tributes page to make it easy to share your memories.

Margaret Rogers, 89, of Cranford, NJ passed away peacefully on...

Send flowers to the Rogers family.