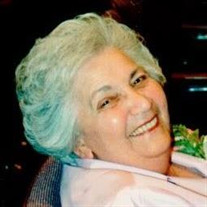 Mrs. Marie Grace Sodano (Maltese), of Whiting, NJ, formerly of South Plainfield, died peacefully on January 19, 2020, at the age of 91. Marie is survived by her daughter, Linda Fernandez, and Linda’s husband Dennis; her brothers Anthony, of Allentown, and Joseph, of Brandon, Florida; and her four grandchildren and four great grandchildren. She is preceded in death by husband Patrick, and her brothers Dominick, James, and Peter Maltese. Marie was born on December 20, 1928, in Newark, NJ, to Frances (Macaluso) and Antonio Maltese. She graduated from West Side High School and went to work at The Prudential Insurance Company after graduation, staying with the company until her retirement in 1979. She met the love of her life, Patrick, in July 1947. He proposed six months later and they were married on September 19, 1948, in Newark. Her daughter, Linda, was born three years later, and seven years later, the family achieved their dream of owning a home in the suburbs when they moved to South Plainfield, NJ. A lifelong Catholic, Marie was strong in her faith, counting her First Holy Communion among her happiest memories and turning to the Blessed Mother in times of sadness. She enjoyed spending time and partying with her immediate and extended family, cooking Italian meals, along with listening to gospel and Italian music, talk radio and television news. Her family remembers her wonderful sense of humor, boisterous laugh, and her famous cheesecake. In lieu of flowers, please send donations to St. Jude’s Children’s Hospital.

The family of Marie G Sodano created this Life Tributes page to make it easy to share your memories.

Send flowers to the Sodano family.