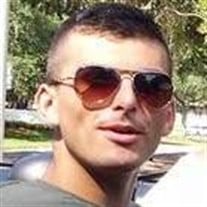 Michael J. Vecchio AWO3, 19 from Brick, New Jersey, was active duty in the United States Navy as a Naval Aircrewman Operator, Airman. Due to his exemplary accomplishments and achievements, the United States Navy posthumously advanced him to the rank of Petty Officer 3rd Class. Michael was taken from us after a tragic accident in Jacksonville, Florida near where he was stationed. He is survived by his parents, Michael and Carol, and his brother, Vincent. He is also survived by his maternal grandmother Nancy Severs and many aunts and uncles; Jim and Diane Vecchio, Donna and Michael Sever, Kevin and Lori Browne, Cheryl and Joseph Messina, Sharon and Darrel Gedde, Rick and Michele Vecchio, and John and Jackie Vecchio. He is also survived by many cousins, Andrew, Jake, David, Lisa, Laurie, Rene, Ryan, Eric, Heather, Kimberly, Jennifer, Kevin Jr., Patrick, Kellina, Charlie, Gabrielle, and Joseph. He will be dearly missed by his best friend and love Jess Solan. Michael was predeceased by his paternal grandparents Ana Marie and Vincent Vecchio and maternal grandfather Frederick Severs. Michael grew up in Brick, New Jersey where he participated in nearly every extracurricular activity available for a kid growing up. He was well known and had a lot of friends to share the joys of childhood. He always wanted to try EVERYTHING and had a great love of life with all it had to offer. His talents went much further than team sports, and he was an avid show off who pushed the envelope many times to prove it. He loved many individual sports like snowboarding, surfing, golf, mountain biking, skating, and spear fishing, just to name a few! His abilities were diverse and he was talented enough to pull it all off. Michael always pushed himself to be the best that he could be due to his competitive spirit. He was strong willed and a force to be reckoned with if you challenged him. His aptitude was high, and his cunning character kept opponents on edge. If you had to go toe to toe with him for a battle of the wits, then you were in for a ride, and you were going to lose whether you knew it or not. Many family and friends will remember his enormous personality, as he often somehow was able to get ALL the attention! Whether wearing different colored socks or just some outlandish trick to get your attention, he always stood out of a crowd. Maybe you were with him to hear one of his wisecracks, with great timing and wit to make his point. Anyway you put it, he could always amuse the masses with his special form of entertainment. His softer side was precious. If you were fortunate enough to hear the harmonic sounds of his ukulele it could transform you to a beautiful place. He had a caring, laid back character. You could catch him shoveling the snow of an elderly person's driveway for no gratuity or lending his soothing, charismatic words to help a friend in need. He always had a true heart and did the right thing where many others would have taken the easier path. You could always count on him for being by your side. Michael was a well-rounded person. Loyalty could be seen as he had come to the rescue of others in need without hesitation. Defending the honor of a girl or jumping into a fight to help his comrades. You always knew that he had your back. Honor played a role into who he was. Following the footsteps of his traditional Navy family, he included himself in the ranks that only the few and proud could call themselves. The rest of us were considered “civs.” He was proud to be “An Aircrewman” and was at the top of his rate, headed for greatness. He did it with the most honorable fashion to represent what we all love about this country. His most exclusive talent was his smoothness. He could say anything with the fluidness of the gentlest stream. We all felt comforted enough when he would convince you “It’s ok.” Nineteen years is a very short time to live. Michael experienced more adventures than most people do in their lifetime. Pushing his fears aside he tackled all his goals with vigor and zest. He was a shooting star…. burning bright and running fast! Please learn from Michael. LIVE LIFE TO THE FULLEST, DON’T SECOND GUESS YOUR INSTINCTS AND PURSUE ALL YOUR DREAMS TO MAKE THEM REALITY! You will not regret it! The viewing will be held on Sunday from 1pm-4pm and 7pm-9pm at Carmona-Bolen Home for Funerals, 412 Main Street, Toms River. A funeral mass will be held at 9:15am on Monday at St. Luke’s Church in Toms River. Burial will follow at Brigadier General William C. Doyle Memorial Cemetery, Wrightstown where he will rest in peace with his beloved Grandfather who inspired him to serve our country. In lieu of flowers, the family is asking to consider a donation in Michael’s name to NJ Sharing network, Attn: Foundation 691 Central Ave New Providence, NJ 07974 or The Navy-Marine Corps Relief Society, Attn: Development 875 N. Randolph St. Ste 225 Arlington, VA 22203.

The family of Michael Vecchio created this Life Tributes page to make it easy to share your memories.

Send flowers to the Vecchio family.