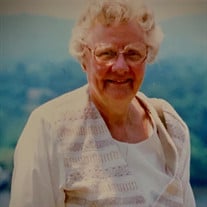 Myra Ruth Carlson, 92, of Beachwood, New Jersey passed away Easter Sunday 12 April 2020 peacefully at home surrounded by her beloved family. She was born on 20 February 1928 to the late Edward Franke and the late Louisa Lehmann. Myra married her late husband Alfred Carlson on 22 January 1949. The pair began their married life in Massachusetts and later returned to New Jersey first to Glassboro and then finally to Beachwood where they spent the rest of their lives. Myra was a dedicated member of The Church of Jesus Christ of Latter Day Saints where she served in the Choir, the Primary organization, the Cub Scout program, and the Women’s Relief Society. She served as director of the Toms River Family History Center for over ten years where she eagerly helped many patrons research their family history as well as working on and completing her own. Along with her husband, she volunteered for the 4-H program, specifically running the food competitions for the Ocean County Fair. Myra was a loving mother and devoted grandmother spending most of her time with her grandchildren. She dedicated her life to helping others and she is remembered fondly as a superb homemaker and caregiver. In her free time she enjoyed crossword puzzles, cross-stitch, and baking as well as diligently attending the extracurricular activities of her grandchildren. Myra is predeceased by her parents, her husband Alfred, and her sister Edna Franke Hoeflich. She is survived by her three children Norman Carlson and his wife Nancy, Robert Carlson, and Karen Anwander and her husband Peter. Additionally, she is survived by her seven grandchildren Kevin Carlson, Eric Carlson, Sarah Carlson, Amanda Anwander, Tyler Anwander, Brielle Anwander, and Kelle Anwander as well as her brother in law Donald Carlson, five nieces and nephews, and her wonderful caregiver Ophelia. Interment will be held at the Ocean County Memorial Gardens in Waretown, New Jersey.

The family of Myra Ruth Carlson created this Life Tributes page to make it easy to share your memories.

Send flowers to the Carlson family.