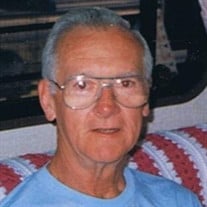 Norman Dale Parmley, Sr. passed away at Community Medical Center on August 3, 2021. He is predeceased by his beloved wife of 69 years, Frieda, parents Charles and Nellie Mae Parmley, and his brothers, Richard, and Donald. Norman, Sr. was born on April 27, 1924, in Altamont, Missouri. Moving to nearby Trenton, Missouri, in his teenage years. His 21-year career with the US Navy began as soon as he turned 18, in 1942, enlisting with a friend after the attack on Pearl Harbor. During World War II he served in the Pacific Theatre, on board the LST-396, which was sunk near the Solomon Islands in 1943. He also served on LC1-L-675 in the Mediterranean during 1944, and later returned to the Pacific on LST-850 from 1944-1945. Norman, Sr. also served aboard the USS Okanogan, involved with UN supply and rescue operations during the Korean War. His final tours were aboard the USS Arneb, circumnavigating the world in support of two Operation Deep Freeze scientific expeditions to Antarctica, between 1955 and 1957. For his naval service, Norman earned four Good Conduct Medals, the Korean Service Medal (2 Star), the China Service Medal, the United Nations Service Medal, the National Defense Service Medal, and the Navy Occupation Service Medal. Upon release from active duty from the US Navy, he managed the Commissary Store at the Naval Receiving Station in Philadelphia, PA for several years. After attaining the rank of Chief Petty Officer Commissaryman, he was honorably discharged in December of 1962. Amidst his years of military service, he married the love of his life, Frieda Marie Lecuyer and they settled in Island Heights, New Jersey. After retiring from the Navy, he found employment as the custodian for the Island Heights Elementary School, a position he held for 15 years before finally retiring in 1996. When his children were young, he often took the family on road trips in their truck camper and after retiring, he and Frieda, would take their 36-foot 5th wheel to Florida for a couple months in the wintertime each year. He enjoyed fishing and crabbing on the Barnegat Bay, in his boat, and anyone could find him during the summer months sitting in his screened tent listening to baseball games or oldies on the radio. He is survived by his two sons and daughter-in-law, Norman Jr., Robert and his wife, Jayne. His five grandchildren, Kristopher, Kimberly, Beth, Justin and Ryan, and great grandchildren, Travis, Trent, and Dani. He is also survived by his sister Carol, who still resides in Missouri, and several nieces and nephews, with special mention to Claudia and Emma. Donations to a charity or organization of your choice in remembrance of Norman Dale Parmley, Sr. is very much appreciated. No services are planned at this time.

Norman Dale Parmley, Sr. passed away at Community Medical Center on August 3, 2021. He is predeceased by his beloved wife of 69 years, Frieda, parents Charles and Nellie Mae Parmley, and his brothers, Richard, and Donald. Norman, Sr. was born... View Obituary & Service Information

The family of Mr. Norman Dale Parmley Sr. created this Life Tributes page to make it easy to share your memories.

Send flowers to the Parmley family.