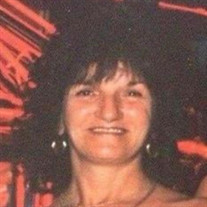 Patricia Ann LeVance was a loving, caring wife, mother, and grandmother. Patricia passed away October 15th, 2021, surrounded by her husband Jim, her daughter Tina, her sister Helen, her son-in-law Tony, and her grandchildren, Dana and Leah. She was born on January 1st, 1945 in Montclair, New Jersey. She was raised in Bayville, New Jersey, and raised her daughter in cities nearby. Patricia worked hard her entire life. She managed many convenience stores in Bayville where she was known for never being seen without a pair of high heels on and a full face of makeup. In 1986, she met Jim, the love of her life. They married in September of 1986. Jim and Patty loved to ride with the Blue Knights Chapter XI and did so for 23 years. They just celebrated 35 years of loving marriage in September in 2021. Patty’s family was her world. Working and raising a daughter as a single mother were not easy, but she made sure her daughter knew she was always there for her. She raised her daughter, Tina, all by herself and gave her the best life she could. She always put Tina first, no matter what. In 1997 she became a grandmother, and again in 1999 when her grandchildren were born. In 2008, Patty and Jim moved to North Carolina from New Jersey in order to be near her daughter and her family. She adored Dana and Leah with all her heart. Spending time with them meant the world to her. She passed her love of making crafts onto her daughter and grandchildren. Patty made every holiday special with her amazing money origami gifts. Patty set a great example of what a mother could and should be to both her daughter and those who knew them both.There will be a service held in New Jersey, but not in North Carolina. In honor of her memory, her family is asking for monetary or physical donations to Baby Bundles in Charlotte, North Carolina in order to help support and empower other single mothers like Patricia. Patricia leaves behind her husband Jim, her daughter Tina, her son-in-law Tony, her grandchildren Dana and Leah, her siblings, Helen, Robert, John, Christine, and many more loved ones. She is predeceased by her mother, father, and brother Joey.

Patricia Ann LeVance was a loving, caring wife, mother, and grandmother. Patricia passed away October 15th, 2021, surrounded by her husband Jim, her daughter Tina, her sister Helen, her son-in-law Tony, and her grandchildren, Dana and Leah. She... View Obituary & Service Information

The family of Patricia Ann LeVance created this Life Tributes page to make it easy to share your memories.

Send flowers to the LeVance family.