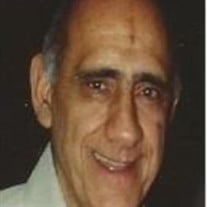 Paul James Rubino was born in 1932 to Paul Rubino, Sr. and Guistina Rubino in Jersey City, NJ and died on May 28, 2021 in Whiting, NJ. Paul is survived by his wife, Cecelia and his sons, Paul John Rubino wedded to Ellen Rubino, Gerard K. Rubino, and his daughter Cecelia wedded to Scott Kessler. Paul is also survived by his loving grandchildren Beau, Madison, August, Albireo, Elea and Sarah and by his sister Angelina and many loving nieces and nephews and their children. He was predeceased by his daughters Maria and Elisabeth, his parents and eight sisters and brothers Frances Di Paula, Mary Rubino, Jean Gatti and Anthony, John, Patrick, James, and Valeriano along with their husbands and wives. Paul attended St. Bridgets Grammar School and Ferris High School both in Jersey City. In 1951 he joined the army and was stationed in Trieste, Italy. While in service he was the catcher on his Division Baseball Team, the Giants. He was honorably discharged in 1953 and returned to work at his family's tavern until 1958. In June of 1957, Paul and Cecelia were wed at St. Bridget's Church in Jersey City and celebrated 63 plus years of marriage. In 1958 he joined Bond Bread in Jersey City as a sales/delivery man. Later he moved on to Wonder Bread and remained with the Company until he retired in 1993. Paul and Cecelia moved to Middletown, NJ in 1971 where they raised their children. After retiring, they moved to Whiting, NJ. During his life he coached Little League in Jersey City and in Middletown. He also coached his daughter's softball team in Red Bank, NJ. In Whiting, NJ, Paul enjoyed playing softball and was a shortstop or pitcher for different teams, but especially the Whiting Sox Team, from the age of 61 to 83 years of age. Paul also umpired Little League Baseball for a number of years. In 1997 and 1999, Paul, along with his teammates, represented New Jersey in the National Senior Olympics held in Tucson, AZ and then in Orlando, FLA. He loved Baseball and was a Mets and Red Sox fan and was also a Hockey fan. Paul was known for his spirit of fun and his great sense of humor. Paul lived in Crestwood Village 5 and served his community in various capacities. He served his church, St. Elizabeth Ann Seton Church, as an usher for many years. His funeral mass was at St. Elizabeth Ann Seton Church on Thursday, June 3, 2021 and was interred at Mount Olivet Cemetary in Middletown, NJ.

Paul James Rubino was born in 1932 to Paul Rubino, Sr. and Guistina Rubino in Jersey City, NJ and died on May 28, 2021 in Whiting, NJ. Paul is survived by his wife, Cecelia and his sons, Paul John Rubino wedded to Ellen Rubino, Gerard K.... View Obituary & Service Information

The family of Paul J Rubino created this Life Tributes page to make it easy to share your memories.

Paul James Rubino was born in 1932 to Paul Rubino, Sr. and Guistina...

Send flowers to the Rubino family.