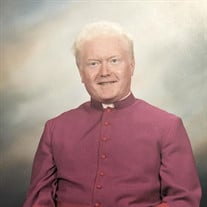 The Reverand Monsignor Philip A. Lowery

Msgr. Philip A. Lowery joined Jesus the Eternal High Priest on November 28, 2019 at 12:01 AM Thanksgiving Day. With a grateful heart he entered the Heavenly Kingdom. Msgr. Lowery was born on February 22, 1949 and grew up in Jersey City as the only child of Philip and Ella Lowery; raised in the Catholic faith and attended Catholic schools. He attended Pace University in New York City. Responding to God’s call to the priesthood, he entered Holy Apostles College and Seminary, in Cromwell, Connecticut and completed his graduate studies at Mount St. Mary’s Seminary, Emmitsburg, Maryland. He was ordained to the priesthood on May 22, 1976. He served as parochial vicar at St. Joseph’s parish in Toms River, from 1976 to 1987; and then at St. Barnabas parish in Bayville from 1987 to 1990. He was appointed pastor of St. James Church in Red Bank, NJ in 1990, and concurrently director of Red Bank Catholic High School and Saint James Grammar School, an assignment he handled for the next 29 years, making him the longest serving pastor of that parish. Msgr. Lowery was not only a servant of the Church; he also served the country. He served as NJ State Police Chief of Chaplains for over 25 years providing spiritual support and counseling for officers and their families. He was one of the first responders during 9/11 attacks, working tirelessly with New Jersey’s Urban Search and Rescue (USAR), Task Force 1 at the Ground Zero. Although he hated long flights, he traveled to New Orleans to support the recovery efforts following Hurricane Katrina in 2005. In the aftermath of the Hurricane Sandy in 2012, he, together with Bishop David O’Connell, visited the churches and places affected by the disaster. He was always there for those in need and was generous to give his time, support and advice to anyone at any time. He is a great loss not only to the Catholic Church but also to our country. Viewing will be on Dec 4, 2019 from 10:00 AM and culminating with a vigil Mass at 7:00 PM at St. James Church, 94 Broad Street, Red Bank, NJ. The funeral Mass will be officiated by the Most Rev. David O’ Connell, D.D., on December 5, 2019 at 10:00 AM at the same church. Interment follows at Mt. Olivet Cemetery in Middletown, NJ. In Lieu of Flowers Please make a donation to: Monsignor Philip A. Lowery Scholarship Foundation 94 Broad Street, Red Bank, NJ 07701

Msgr. Philip A. Lowery joined Jesus the Eternal High Priest on November 28, 2019 at 12:01 AM Thanksgiving Day. With a grateful heart he entered the Heavenly Kingdom. Msgr. Lowery was born on February 22, 1949 and grew up in Jersey City as... View Obituary & Service Information

The family of The Reverand Monsignor Philip A. Lowery created this Life Tributes page to make it easy to share your memories.