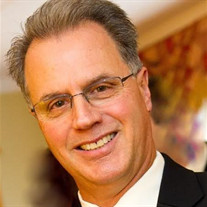 Rand Spiro Skopas, 63, of Toms River passed away at home after a courageous battle with pancreatic cancer on Monday, February 6, 2017. His motto was "Endure the Cure". Rand graduated from CBA in 1971 and Dickinson College in 1975. He helped run Skopas' Avon Pavilion then ran/owned the Bonanza in Brick and Toms River for years. Rand lived life to the fullest. He earned his Eagle Scout by age 14, traveled around the country visiting our beautiful National Parks, camping and fishing along the way by age 21. In the winter months, Rand was an avid skier, he loved skiing on the edge. From Spring to Fall you can always catch him at dawn fishing in his kayak in the back bay of IBSP. Rand cherished his family and friends more than anything. He will be dearly missed by his ski buddies, fishing pals, and Silverton Crew. Rand was predeceased by his father James in 2015. He is survived by his wife, Nancy (Krauszer) and two sons, James Richard and his wife Brigid, NY and Rand Alexander of Toms River. He is also survived by his two granddaughters, Elayna Marie and Natalie Diane, who he adored, and his mother Helen Skopas (Pappas). The family would like to extend a special thank-you to Monmouth Medical Oncology, Dr. Seth Cohen and all his caretakers. A visitation will be held on Thursday, February 9 from 4pm-8pm at "The Family Owned" Carmona-Bolen Home for Funerals, 412 Main Street, Toms River. A funeral mass will take place, Friday, 11:30am at Saint Barbara's Greek Orthodox Church, Toms River. Burial will follow at Saint Joseph Cemetery, Toms River. In lieu of flowers, donations can be made in Rand's name to the Monmouth Medical Center Foundation http://www.barnabashealth.org/Monmouth-Medical-Center/Giving.aspx

Rand Spiro Skopas, 63, of Toms River passed away at home after a courageous battle with pancreatic cancer on Monday, February 6, 2017. His motto was "Endure the Cure". Rand graduated from CBA in 1971 and Dickinson College in 1975. He helped... View Obituary & Service Information

The family of Rand Spiro Skopas created this Life Tributes page to make it easy to share your memories.

Rand Spiro Skopas, 63, of Toms River passed away at home after...

Send flowers to the Skopas family.