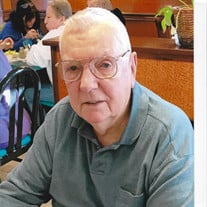 Former Staten Islander, Robert Parsons, 84, of Toms River, NJ passed away peacefully on Thursday March 24, 2022 at home surrounded by his family. Robert was born and raised in West Brighton, Staten Island, NY. He attended Sacred Heart School and Port Richmond HS (1955). Immediately after graduation he joined the Air Force, where he became an aerial photographer with top secret clearance. He was stationed in Germany where he met his wife Renate and married in 1958. He then was transferred to England, where his daughter Susan was born. Upon returning to the United States, he served the rest of his military in Washington DC. He was awarded a certificate of recognition for his participation in the Presidential Inauguration for JFK. Upon leaving the service he resided in West Brighton with his family until 1976, moving to Eltingville in 1976 until 1991. In the early 70’s He opened a photography store in West Brighton. He worked for Kodak for several years and then went to the Staten Island Advance for over 20 yrs as a photographer. While working at the Advance, he covered many major events such as several Democratic and Republican conventions, met Presidents, dignitaries, sports figures and celebrities. He was also co-owner with his wife Renate of the Family Shoppe, Victory Blvd, Castleton Corners. After retiring from the Advance, he freelanced as a photographer for several politicians. In 1991, he moved to New Port Richey, Florida, where he went to work for Target and retired after 21 yrs and then moved to Toms River, NJ in 2010, where he resided until his death. He loved spending time with his family and taking many vacations. Spent many summers in Ocean Beach and Lavalette, NJ. Enjoyed many summers of backyard fun with extended family and friends. Attended many Port Richmond reunions over the years. He was a huge Mets fan for several years and then switched to a Tampa Bay fan when he moved to Florida. He also loved buying and selling stocks. He is predeceased by his wife Renate. He is survived by his daughter Susan (Parsons) Olaschinez and son-in-law Bill (Billio) Olaschinez, grandson Robert Manning and fiancé Jesin Samuel, granddaughter Pattie Ayala and spouse Mike Ayala, 2 great-grandchildren Mikey Ayala and Mason Manning. Family and friends are invited to gather on Monday, March 28 from 3:00 PM to 8:00 PM at the Carmona-Bolen Home for Funerals, 412 Main Street, Toms River, NJ. A service will take place at the funeral home on Tuesday, March 29 at 11:00 AM. In lieu of flowers, donations may be made to SAVE Rescue Shelter, 1594 Lakewood Rd #5, Toms River, NJ 08755 or directly to their PayPal link: https://www.paypal.com/cgi-bin/webscr?cmd=_s-xclick&hosted_button_id=UFYCUE36TSBSW&source=url

The family of Robert Parsons created this Life Tributes page to make it easy to share your memories.

Send flowers to the Parsons family.