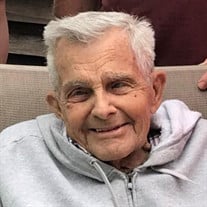 Robert Eugene, of Whiting, New Jersey, passed away August 11, 2021, at the ripe young age of 93. He was born March 9, 1928, in Orange, NJ. Bob grew up in Maplewood, NJ. He graduated from Saint Benedict Prep in Newark and attended Seton Hall University. He met and married his sister’s best friend, Blanche C. Beaumont, in Forest Hills, Newark after the Korean War where he earned the rank of Staff Sergeant. He started his career as a Commercial Insurance Underwriter at North Jersey Underwriters, Newark, NJ. Bob and Blanche lived in Hazlet, NJ until retiring to Whiting. His Catholic faith guided his daily life and activities. While living in Hazlet he was a member of St. Benedict Catholic Church, where he was a member of the first group of Eucharistic Ministers in the Diocese of Trenton. He was a Marriage Encounter Team Leader and was instrumental in bringing Marriage Encounter to Bermuda. He also directed the Religious Education program. Later, as a parishioner of Saint Elizabeth Ann Seton Church in Whiting, he hosted a Renew group, was a Eucharistic minister, a Lector, and a faithful attendee at the Adoration Chapel. Bob was a former Grand Knight of the Knights of Columbus, John D. McMahon Assembly, Toms River and a Flame of Love Prayer Group participant. He is survived by Blanche, his wife of 68 years, his 3 daughters, Diane Laskowski of Middletown, NJ and her husband Bob, Victoria Cofone and her spouse Michael of St. Augustine, FL, and Pamela Serafin of Lopatcong, NJ and her husband John, as well as his last remaining sibling Mary Anne Rapp who is 91 and resides in Colorado. He is predeceased by his parents Frank and Ruth Weber, his siblings Ginny Gigantino and Frank Weber, and his son Bobby. Bob will also be dearly missed by his 13 grandchildren and 3 great-grandchildren. Visitation will be Monday 9:00 AM to 10:30 AM at Carmona-Bolen Home For Funerals, 66 Lacey Rd. Whiting, NJ 08759. Mass will follow at St. Elizabeth Ann Seton R.C. Church in Whiting. In lieu of flowers, contributions may be made in his name to St. Jude’s Children Hospital https://www.stjude.org/donate/donate-to-st-jude.html or the mission of your choice.

Robert Eugene, of Whiting, New Jersey, passed away August 11, 2021, at the ripe young age of 93. He was born March 9, 1928, in Orange, NJ. Bob grew up in Maplewood, NJ. He graduated from Saint Benedict Prep in Newark and attended Seton Hall... View Obituary & Service Information

The family of Robert E Weber created this Life Tributes page to make it easy to share your memories.

Send flowers to the Weber family.