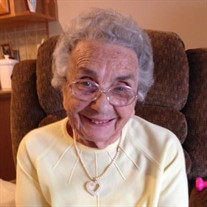 Rose Rokosz of Whiting and Forked River passed away on April 9, 2020. Born in Sayreville, NJ ninety seven years ago to Frank and Cecilia (nee Czajkowska) Brajczewski, Rose and her family soon moved to the Paulus Hook section of Jersey City. She loved Jersey City and especially her church, Our Lady of Czestochowa. A young local boy named Henry Rokosz caught her eye and after an engagement that included an aborted attempt at learning to drive, an introduction to pizza and spitting out her first and only taste of beer, the couple wed in June 1943 at OLC church. Following Henry’s return from Army active duty in 1946, the couple bought their 3 family house on Warren St., With both working at Western Electric they managed to scrape together the hefty $5,000 price tag. A year later they had their first son, Henry jr. A second son Francis was born five years later. While her husband continued to work at Western, Rose took on her full time role as homemaker, raising 2 sons, cooking, cleaning, seeing that everyone did homework and most problematically getting her husband out of bed for work every weekday. Around 1961 Rose decided she needed a break, she took a job with the Jersey City Police as a school crossing guard while continuing to maintain her homemaking duties. Her post was the crossing at Grand and Henderson (now Marin) adjacent to OLC school. There, over the years, she met and greeted hundreds of children and their parents. Everyone knew “Rosie the cop.” She probably could have run for mayor during those years and won. She eventually retired but only after accumulating over 30 years of service. Both sons were married with their own children while Rose and Henry were enjoying their retirement years. But for Rose, the years of standing on her corner coupled with increasing severe arthritis in her legs began to take their toll. She continued her daily visits to Church but after Henry passed away in 2005 she realized she had to take charge of all the tasks they used to share. Her legs grew weaker and when she fell in her 2nd floor bedroom, her cries for help went unanswered for 5 hours. A month later she left the hospital and rehab to return to her apartment, now modified for basement living only. Hurricane Sandy added to her problems, she had to move out for a month for major renovations. All the while her legs grew more problematic and getting out of the basement was becoming difficult and painful. She didn’t think that the knee replacement surgery to both legs that the orthopedist recommended was realistic, not for a 91 yr old. The biggest fight of her life, until this last one, was the battle with her sons to get her out of Jersey City and into a new life at Crestwood Manor. Nothing was going to take her away from her church and all her friends. “I’m not going!” “They’re putting me in a Home!” In October 2014 she reluctantly made the move, someone said at gun point but by January 1, 2015 she was “thanking God” for moving her. Her Independent living at Crestwood lasted some 3 years when another fall and month in the hospital placed her into the Assisted Living unit. Her weight increased from 110 lbs in October 2014 to 140 lbs in 2020. She admitted due to a lack of mobility and great food. Rose was pre deceased by her parents Frank and Cecilia Brajczewski, her husband Henry Rokosz, brothers Frank, Edward and Eugene Brajczewski and sister Eugenia Long. She leaves her sons Henry (Hank)and his wife Christine Rokosz, their children, (her grandsons)Christopher, Jeffrey, Craig and his wife Laura Rokosz. Her son Francis (Frank)and his children,sons Eric and his wife Ashley, Timothy and Michael, daughters Kimberly, Nicole and her husband Marco Ramos. Rose’s most enjoyable days these last few years were spent with her visiting great grandchildren. All nine teens and toddlers would visit at various times, as well as her old friends and family from Jersey City, these were her favorite moments. Rose loved everyone, there wasn’t a thing about Jersey City that she didn’t miss, yet her new life added new experiences, new family members and a realization that things can change for the better, even if you’re in your nineties. The world’s sweetest woman exits for the eternal life she’s wished for. Enjoy!

The family of Rose C Rokosz created this Life Tributes page to make it easy to share your memories.

Rose Rokosz of Whiting and Forked River passed away on April...

Send flowers to the Rokosz family.