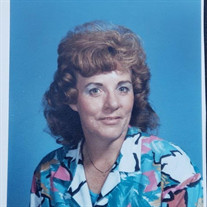 Ruth Elizabeth (White-Enlow) Forman, 76, of Toms River, having spent her entire life on the Jersey Shore, passed peacefully on the morning of Thursday, April 30, 2020, from stroke related conditions. Ruth was the third of five children born to James Edward and Blanche Mable (Addison) White, both of Freehold, NJ. She was a graduate of Freehold Regional High School, Class of 1963. She married Nathan Enoch Enlow of Columbia, SC in 1964. Ruth began her public-school bus driving career in 1969 with Pilcher Transportation Service, Howell, NJ. She proceeded to drive for the public-school systems of Lakewood and Eatontown. She finished the majority her 38-year career with Manchester Board of Education. During her 3 plus decades as a school bus driver, known to her students as “Ms. Dusty”, Ruth held many roles including supervisor, NJEA Union representative, certified National Safety Council Defensive Driving Instructor, New Jersey State Certified New-Driver Trainer/Instructor. In May 1975 Ruth captured 2nd Place in the South Jersey Division at the Fourth Annual School Bus Drivers Safety Competition. For many years after Ruth was an instrumental part of this annual competition. Ruth was inducted into the Ocean County Safe Driver Hall of Fame in 1975 by the Ocean County Traffic Safety Committee. In 1982 Ruth married Edwin L. Forman, Jr. of Toms River. Ruth was a long-time member and secretary of the Pine Needle Mixed Bowling League at Ocean Lanes, Lakewood. She enjoyed Country Music and line dancing, Bingo, and following NASCAR; having taken the wheel herself at New Egypt Speedway in the Powder Puff Derby. Upon her retirement in 2007, Ruth was a passionate member of the Homestead Run Community. She held the office of President of the Women’s Club, was Chairperson and active volunteer of many events held at the Homestead Run Club House. Ruth was a member of the American Legion 199 in Lakewood, participating in the Annual American Legion Convention and Parade held in Wildwood. Ruth was passionate about her friends and her family, especially her grandchildren and great-grandchildren. Her absence will leave a deep hole in the hearts of the many who knew her, knew her sacrifices, experienced her kindness and overall pleasantries. Ruth was predeceased by her parents James and Blanche, brother James Jr., husbands Nathan (1983) and Larry (2002), and her sister Beverly Pomeroy of Toms River. Surviving are two brothers John White of Howell, and Richard White of Hampton, SC; daughter Tammy (Enlow-Rodriguez) and son-in-law Scott Norwood of Suwanee, GA; son Thomas Enlow of Athens, GA; granddaughter Kara (Rodriguez) and grandson-in-law Jonathan Schulte of Inverness, FL; grandsons John and Brendan, great-grandchildren LilyAnn and James, many nieces and nephews, grand-nieces and nephews, and great-grand nieces and nephews. A Celebration of Life Gathering will be held on Friday, June 10, 2022, from 2pm-4pm at Carmona Bolen Home for Funerals of Toms River.

Ruth Elizabeth (White-Enlow) Forman, 76, of Toms River, having spent her entire life on the Jersey Shore, passed peacefully on the morning of Thursday, April 30, 2020, from stroke related conditions. Ruth was the third of five children born... View Obituary & Service Information

The family of Ruth E. Forman created this Life Tributes page to make it easy to share your memories.

Send flowers to the Forman family.