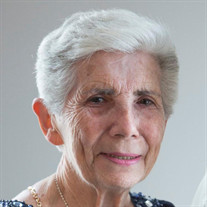 Sarah “Sally” Croson, nee Connolly, 81, of Carteret passed away on Monday, January 4, 2021 while undergoing rehabilitation after a brief hospital stay. Sarah was born and raised in Brooklyn, New York, before relocating to New Jersey in the 1950s. Although, she would often state that they ‘roll up the sidewalks at 8 p.m.,’ Sarah grew to love her adopted state. Throughout the years, she resided in Irvington, Union, Metuchen, and Whiting before moving to Carteret in 2015. Mrs. Croson was employed by Reliable Manufacturing – Sharon Concepts in Union for over 30 years and held various positions before becoming the company’s Production Supervisor. After semi-retiring, she worked in customer service at CEW Lighting in Edison for 5 years. As a devoted spouse and faithful friend, Sarah spent subsequent years lovingly caring for her husband and friends before their deaths. Having been raised in the pre-technology era, she learned and mastered computer technology in middle-age and thoroughly enjoyed various gadgets, which she enthusiastically shared with her grandchildren and great-grandchildren. She cherished her relationships and interactions with each of them - whether it be doing puzzles, playing games on her tablet, cuddling together in her favorite chair, or joking on a ZOOM call. An avid reader, she was always ready to discuss current events, and share a good book as well as her strong opinions over a pot of coffee. Sarah was predeceased by her husband, Louis Croson in 2006; her parents, Thomas J. Connolly and Sarah Purcell Connolly; her brothers, Thomas J., Jr., John A., Robert E., and Raymond Connolly; her sister, Mary V. Bianco; her ex-husband, Harold Allen; and two stepsons, Michael Croson and Stevan Croson. Surviving are her children, Kathleen and her husband Nicholas Salardino of Carteret, New Jersey; William Allen and his wife, Margaret of Forest, Virginia; her ‘favorite’ son, James Allen and his wife, Ann of Washington, New Jersey; and David Allen and his wife, Diane of Fredericksburg, Virginia; stepdaughter, Kathryn Ely and her husband, Russell of Massachusetts; and stepson, Daniel Croson and his wife, Donna, of Carteret, New Jersey. She is also survived by 35 grandchildren and over 40 great-grandchildren; her sister, Elizabeth T. Bianco, of Rochester, New York; her brother, Joseph E. Connolly, of Texas; her cousin, Joan Lind of Brooklyn, New York, and many nieces and nephews. In lieu of flowers, donations in memory of Sarah may be made to the Alzheimer’s Association of Greater New Jersey or St Jude’s Children’s Hospital. Arrangements have been made through Carmona-Bolen Home for Funerals in Whiting. Inurnment will be at Woodbridge Memorial Gardens in Woodbridge, New Jersey. A memorial service in celebration of Sarah’s life will be held in the spring; however, no date has been determined yet.

The family of Sarah "Sally" Croson created this Life Tributes page to make it easy to share your memories.

Send flowers to the Croson family.