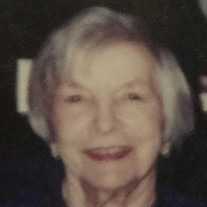 Estelle Teresa Belis, 98, passed away very peacefully at her home in Whiting, N.J., on March 30, 2020 after a brief illness. She was born in Bayonne, N.J., to Jacob and Helen Markiewicz, two Polish immigrants who had passed through Ellis Island before settling in Bayonne. After graduation from Bayonne High School, she worked at Western Electric, part of the old Bell System, for many years in a variety of jobs in Kearny, N.J.; Denver, Colorado; and St. Louis, Missouri. Upon retirement, she moved to Delray Beach, Florida, with her husband William Belis, before ultimately settling in Whiting in the late 1980s. She is survived by her son, Gary Belis, of New York City; her daughter, Diane Snyder, of York, Pennsylvania; her granddaughter, Kirstin Snyder, of Austin, Texas; two great-grandchildren, Eric and Sophia Snyder, of San Antonio, Texas; and many nephews and nieces. She was preceded in death by her husband; her four siblings; and her two grandsons, Daniel and Eric Snyder. Estelle, more often known simply as Stel or sometimes Stella, enjoyed excellent health for all but the last few months of her life, and was still driving at the age of 98 (with her doctor's full blessing, who said she had his permission to drive until she was 100). While she stopped driving on the Garden State Parkway when she turned 95, she continued to drive herself to services at St. Elizabeth Ann Seton Catholic Church, the grocery store, the bank, and CVS. One of the reasons she stayed so sharp for so long is she always loved puzzles and card games. She took frequent trips to Atlantic City with either her son or her retirement community; video poker was her game of choice. She also helped run the bingo games at the Crestwood Village VI Clubhouse. Due to the national emergency, there will be no service. May she rest in peace.

Estelle Teresa Belis, 98, passed away very peacefully at her home in Whiting, N.J., on March 30, 2020 after a brief illness. She was born in Bayonne, N.J., to Jacob and Helen Markiewicz, two Polish immigrants who had passed through Ellis... View Obituary & Service Information

The family of Stella T Belis created this Life Tributes page to make it easy to share your memories.

Estelle Teresa Belis, 98, passed away very peacefully at her...

Send flowers to the Belis family.