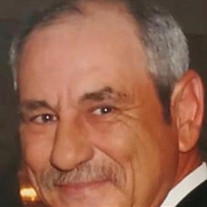 Steve Swearingen, 66, passed away peacefully on April 25, 2020 with his wife and family by his side. Born in East Orange, NJ on March 24, 1954, Steve was a long-time resident of Beachwood, NJ. He was the son of the late June Swearingen (nee Riley) and Martin Halpin and adopted son of the late H. Wayne Swearingen. He was the loving husband of Betty Swearingen (nee Pratt), devoted father of Lisa (Ron) Panco, Kristin (Charles) Camilo, and Meredith (Leon) Milligan, proud Pop Pop of Kayla, Jada, Kara and Chad and beloved brother of Judy (Ben) Reid, Pat Halpin, Donna (Stephen) Troutt, Nancy (Eddie) Knight, Carol (Kenny) Oliver and Harold (Ariane) Swearingen. He will be dearly missed by his surviving brothers-in-law, sisters-in-law, many nieces, nephews, cousins and countless good friends. Steve worked hard his whole life. He was proud of starting his own business, All-Shore Cleaning, of which he was owner and sole full-time employee. As a family member, if you were lucky enough to wash windows with Steve in the summer, you never worked harder but you never laughed as much either. Steve had an amazing sense of humor unmatched by anyone we knew. He was charismatic, kind, strong and comforting. He bragged about the Dallas Cowboys, fanatically followed the New York Yankees and could talk about any and all sports. He loved pizza, Fritos and Funny Bones cakes. He suffered through vegetables because he had to and didn’t have a lot of patience for restaurant food that wasn’t piping hot. He played defensive and offensive tackle for the Toms River South Hitting Indians (class of ’73), served in the military after High School and always liked to get together and talk about old times with his friends. It was wonderful to see this big guy with hands like baseball mitts joyfully playing with his grand-kids, nieces and nephews and letting them climb all over him. As far as his siblings were concerned, Steve could do no wrong. After their parents passed, Steve was their strength and their home. As important as Steve was to his family, family was just as important to him. When he met his wife Betty, his life became complete. He loved Betty with all his heart. She had three wonderful daughters and all three of them generously let Steve be the father that he always wanted to be. He was never happier than when he was at home with Betty and the girls and surrounded by grandchildren and family. When we close our eyes and think of Steve, I’m certain that we can all see him standing at the grill in his backyard, wearing his Yankees baseball cap, spatula in hand, burgers and hot dogs cooking, quietly looking out over his family and friends. He’s watching them all… talking, laughing, eating, drinking, swimming and he’s got the biggest and most genuine smile imaginable. That memory is Steve’s lasting gift to us all. Because of the quarantine, a funeral and service are not possible at this time. Family and friends will gather soon to remember Steve and to celebrate his life.

Steve Swearingen, 66, passed away peacefully on April 25, 2020 with his wife and family by his side. Born in East Orange, NJ on March 24, 1954, Steve was a long-time resident of Beachwood, NJ. He was the son of the late June Swearingen (nee... View Obituary & Service Information

The family of Stephen Swearingen created this Life Tributes page to make it easy to share your memories.

Send flowers to the Swearingen family.