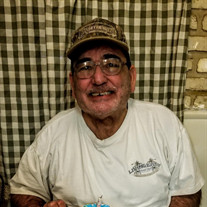 Thomas “Tom” Pierce was a loving husband, father, grandfather, brother, and friend. He passed away while surrounded by his wife, daughters and sister-in-law on October 14, 2021 at the age of 68. He was born to Wilbur Dale and Sarah Jane Pierce on November 12, 1952 at Paul Kimball Hospital in Lakewood. Having spent his early years living in Lakehurst, the Pierce family moved to Bayville in 1960 where Tom grew up with his brothers, Dale, Carl, Ronnie and Jeff. Although he spent time living elsewhere, Bayville was always Tom’s home. After having attended Central Regional High School, he acquired his degree in Fire Science from Ocean County College and worked as an Occupational Safety and Health Specialist for many years. Driven and motivated in his career, he earned many certifications and awards in his field. He retired from Naval Weapons Station Earle in 2013. Tom loved spending time in the kitchen, creating delicious meals for his family or friends. He was very creative and dabbled in many different crafts throughout his life, including photography, baking, gardening, drawing, and stained glass art, to name a few. Tom was an avid fan of Nascar, and was President of his local Nascar Club. Tom enjoyed spending time with his friends and family most of all. He loved to travel with his best friend and wife Patty. Tom leaves behind his beloved wife, his daughters Heather Pierce Ochs (husband Paul), Melissa Orler (husband Craig), his step-son Tony Matthews, his grandchildren Angelena, Frankie and Mason, his brothers Dale Pierce and Jeff Pierce. Tom is predeceased by his parents, Wilbur and Sarah Pierce, as well as his brothers Ronnie and Carl. Tom will be honored in a memorial service at Carmona Bolen Home for Funerals in Toms River on Sunday, October 24, 2021. Memorial service hours are 1-3 pm, followed by a celebration of life at the Elks Lodge on Route 9 in Bayville at 3:30 pm. In lieu of flowers, please consider making a donation in Tom's name to the Bayville Elks by sending a check to: Bayville Elks Lodge #2394 at 247 Rt. 9, Bayville, NJ 08721.

Thomas &#8220;Tom&#8221; Pierce was a loving husband, father, grandfather, brother, and friend. He passed away while surrounded by his wife, daughters and sister-in-law on October 14, 2021 at the age of 68. He was born to Wilbur Dale and Sarah... View Obituary & Service Information

The family of Thomas E Pierce created this Life Tributes page to make it easy to share your memories.

Send flowers to the Pierce family.