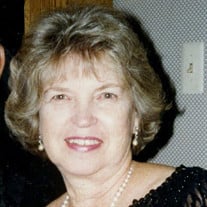 Vera Naryshkin, of Toms River New Jersey. Vera Naryshkin died peacefully at her home in Toms River New Jersey, on Jan. 31, 2020, surrounded by family and her beloved devoted aides. Born in 1934 in the Bronx, New York to Efrosinia Hunter (Russian “ Gontar”) and Grigory Bondaretz, Russian was her first language. Growing up in Cassville New Jersey, on a chicken/ produce farm, she attended grade school in a one-room schoolhouse, and Lakewood High School where she won numerous awards including for her shorthand skills, home economics ( including sewing and knitting), and was captain of the safety guard. Vera was born dancing and could often be found down the road at the famous Russian-American resort Rova Farms (which her parents helped build) , dancing the night away and also working in the ice cream parlor there. Vera was beautiful, graceful, gracious, adventurous, curious, skilled, petite yet strong, practical, capable, fun, emotionally supportive, loyal, and loving. People often described her as "regal". She was always dressed well, and was even known to be found doing housework "all dolled up”. It was on the lake at Rova Farms that she met her husband, George Naryshkin, M.D. (died in 2015) whom she married on Christmas Eve (on break from medical school) at St. Mary's Russian Orthodox Church in Cassville New Jersey. She moved to Louisville Kentucky and helped support her husband through medical school by working as a bookkeeper for Seagrams 7 and the night dispatcher for the Louisville Red Cross. Their first 2 children were born in Louisville. Later, the family moved to NJ where she bore another son, and helped support her family through her husband's surgical residency. A smart businesswoman, accomplished in finance and real estate investing, she served as office manager for her husband's OB/GYN office and later for her son's dental office in Toms River. She was an avid reader, and continually shared helpful articles and books with her daughter. She enjoyed nature, was recharged by a beautiful landscape, and liked to watch thunderstorms. Vera’s life was all about serving her husband and family with total devotion, tenderness, and unconditional love. The most important thing to Vera was seeing her family prospering and happy. She especially delighted in her 7 grandchildren, who have many fond memories of so many fun and loving times with Grandma. Vera travelled the world with her husband, mostly for medical conferences. Together, they attended many balls of the Russian Nobility Association in America, and once appeared in Town and Country Magazine with other RNA members. She enjoyed spending time with her husband, friends, and family, in their homes in Jensen Beach and Port St Lucie Florida. She is survived by her three children, 7 grandchildren, and 2 daughters-in-law : Sonya Naryshkin, M.D. (Larissa, Peter, and Steven Sobolewski), George Naryshkin DDS (Nazilma) (Ana and Nikolas), and Gregory Naryshkin DMD (Viviana) (Christopher and Stephen). Also surviving are a nephew Gary Bondaretz, niece Diane Burke, grand-niece Kim White and her family. In lieu of flowers, contributions may be made to St. Mary’s Russian Orthodox Church, 316 Cassville Rd., Jackson , NJ 08527, 732-928-3223